After an age that only the Gods could endure, Square Enix finally lifted the lid on its Avengers Project during its E3 briefing last night. We now know that the action co-op RPG Marvel’s Avengers game will release on PS4, Xbox One, PC, and Google Stadia on May 15, 2020. The game was shown off thanks to a flashy trailer, but eagle-eyed Marvel fans noticed that Hawkeye is missing. Is Hawkeye in the Avengers game? Read on to find out whether or not in Marvel’s Avengers game if Hawkeye is MIA or not. 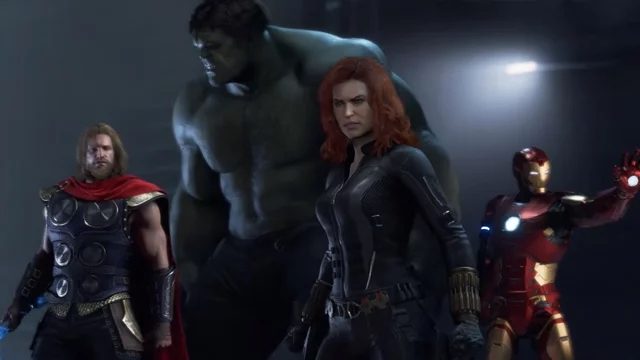 While many of us were enjoying the on-screen heroics of Thor, Black Widow, Iron Man, Captain America, and The Hulk, there was a presence missing throughout the Marvel’s Avengers game reveal trailer. Hawkeye was nowhere to be seen. Unless he was on a super-secret mission unrelated to the events of the game trailer, Hawkeye definitely should have been there. He’s one of the original Avengers, for crying out loud!

Unfortunately, Hawkeye, Clint Barton or otherwise, simply did not appear in the reveal trailer for the Marvel’s Avengers game. As of writing, he isn’t in the game. This doesn’t mean, however, that Hawkeye is missing from Marvel’s Avengers. We could see the expert marksman appear yet.

Square Enix’s Marvel’s Avengers game is due to release on May 15, 2020. There’s plenty of time between right now and its release date for more characters to be confirmed. Square Enix has shown us a reveal trailer, with a little gameplay and a handful of characters. While it is strange that Hawkeye wasn’t involved, he could appear in any number of future trailers for the Avengers game.

Will There be a Final Fantasy 16 PC Release Date on Steam?

Final Fantasy 16 is on its way, and fans are eager to play the next main entry of the iconic…
9 months ago

Is the New Tomb Raider Game a Sequel or Another Reboot?

A new Tomb Raider has been announced that will run on Unreal Engine 5, but what else do we know…
10 months ago

With all the classics Square Enix has been re-releasing lately, fans are wondering if we’ll see a Xenogears remaster release…
12 months ago