The Quordle 166 answer is now revealed for July 9, 2022. Today’s puzzle is not pulling any punches. All four words have peculiarities that create roadblocks in figuring out the solution. Three of the words have double letters with a few that actually have two double letters. The fourth word is slightly easier but has multiple anagrams, so you may not get the word right away. One reprieve, luckily, is that one of the words is a repeat word from two prior Quordles so you might not be fooled on this one. That said, the most challenging word is likely the one in the lower-left position, so for a hint, it’s the name of an animal. Need the entire solution instead? You can find it posted in the following paragraph. 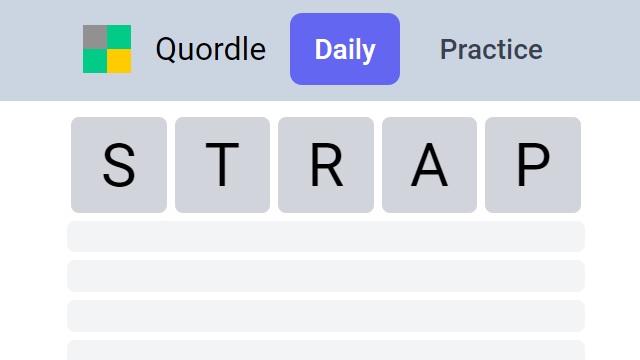 We have to be honest here. We were lucky with “LLAMA” because the two of the words we use at the beginning of all Quordles are “LUCKY” and “THANE” so we got the first “L” and first “A” highlighted in green. Since we cleared all the vowels too, this meant that the second letter could not be different vowel and couldn’t be another “A.” Most of the consonants also didn’t fit, but surprisingly another “L” did, so the only solution at that point was “LLAMA.” If you’re not as lucky with this as we were, though, you might need some help from “MAGMA” as that also has two “A” vowels.

However, “MAGMA” is itself a very difficult word to figure out due to the two “M” and “A” letters. The uncommon “G” consonant is equally tough too. By comparison, “TRUSS” and “STRAP” aren’t as hard, but the double “S” might cause trouble and the letters in “STRAP” can be rearranged to make “PARTS,” “TRAPS,” and “SPRAT.” Hopefully, you can wade through these anagrams to find the right one.

In other news, The Division Resurgence mobile game is putting a new perspective on story events, and a new live-action Death Note series has been announced with the Stranger Things creators at the helm.