Multiplayer modes in single-player games do not always pan out well. In some cases, they’ll feel tacked on, appearing as if an afterthought that publishers wanted to shoehorn in. In other cases, they’ll recycle ideas found in other games in an attempt to jump in on the most recent multiplayer bandwagon. Though this could’ve been the case with the entries below, each has proven itself to be a worthy addition to a title’s main campaign. The following is a list of surprisingly good multiplayer modes that have kept us coming back long after the single-player credits rolled.

Good Multiplayer Modes – The Last of Us 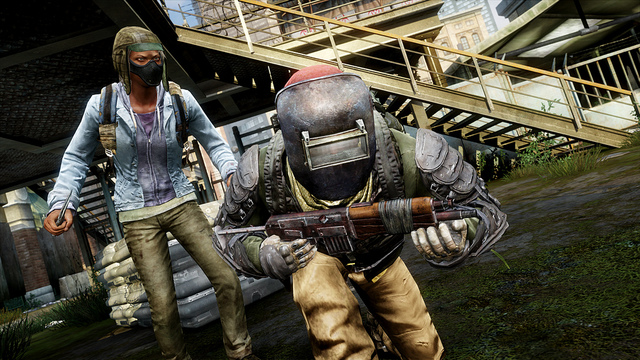 Though most fans recall Joel and Ellie’s emotional journey across the United States when they think of The Last of Us, the game’s multiplayer offering manages to pull off something special all on its own while channeling the survival gameplay from the campaign. This team-based competitive mode properly captures the themes of brutality and survival found in the main campaign, tasking players with coming together in order to raid an area of its supplies while avoiding a cruel fate delivered by the other team.

Amassing a great amount of loot means that each player’s respective group of survivors will live to see another day. Losing many times in a row results in food shortages, and survivor numbers drop accordingly. This meta-game makes Naughty Dog’s world that much more believable, aiding the immersive qualities of the main story without taking anything away from it. 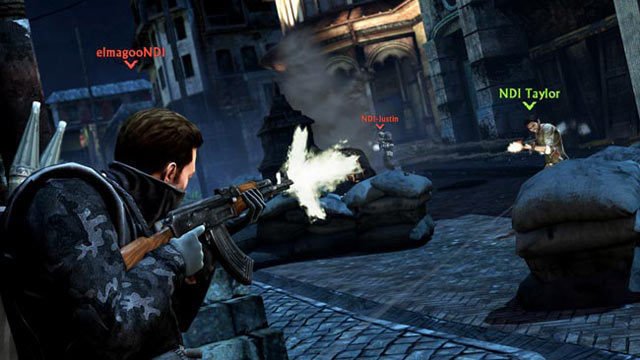 Speaking of multiplayer modes in Naughty Dog games, Uncharted 2: Among Thieves‘ component is just as noteworthy, if only for how genuinely addictive it is and how well it uses the climbing and shooting mechanics from the single-player half. A traditional deathmatch mode has two teams fight one another as any one of the title’s personable cast of characters. A three-person co-op mode shakes things up by tasking players with escalating challenges as they move through a specially designed area.

Another co-op onslaught mode introduces teammates to wave after wave of increasingly difficult enemies, at times sending a dizzying amount of goons towards players within seconds. This all makes for hours of fun to be had outside of the main campaign, which is still worthy of all those game of the year awards to this day. 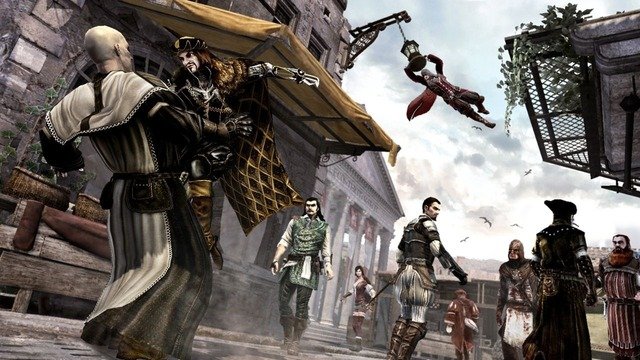 Many were skeptical of Assassin’s Creed: Brotherhood‘s multiplayer component. Seen mostly as a ploy by Ubisoft to appeal to a broader market, it was hard to imagine how the series’ parkour and stealth mechanics would translate into an arena filled with other players. Despite the negativity surrounding it from the outset, Brotherhood manages to pull off an inventive and entertaining multiplayer experience.

Players must assassinate specific human combatants on the battlefield while blending in with crowds to avoid being killed by someone else. Ideally, one is meant to quickly murder another player and return to a computer-controlled crowd as if nothing has happened. Recklessly killing NPCs or other people’s targets results in a point deduction, making Brotherhood‘s multiplayer mode smart, unique, and impressively calculated. 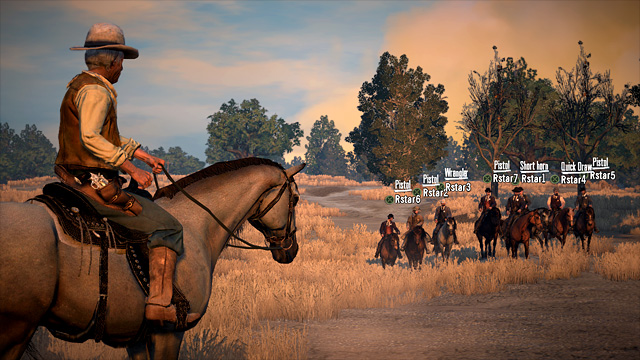 As a sequel to Red Dead Revolver, many weren’t expecting Red Dead Redemption‘s multiplayer offering to be that sophisticated. Rockstar’s Wild West title manages to destroy these assumptions, however, tossing players into a massive free range, open world lobby that allows a bevy of would-be cowboys the opportunity to travel around together to complete objectives and earn some experience. And this is just the tip of the iceberg.

A host of competitive and cooperative modes can be found throughout the map for players to enjoy. Fun bouts of team deathmatch could be played before diving into any one of the title’s more intensive modes like Hold Your Own or Grab the Bag. DLC like Outlaws To The End and the Undead Nightmare expansion brings even more variety to the table. In the case of the latter, slaughtering hordes of cowboy zombies never gets old. 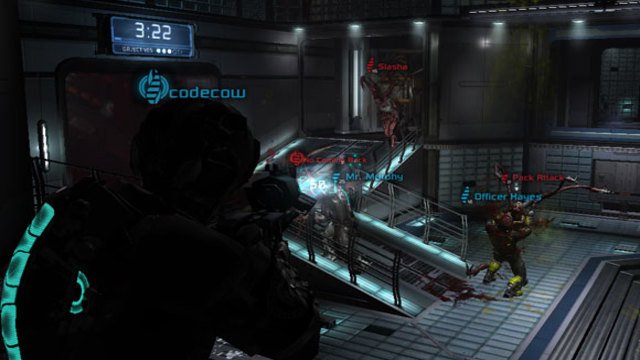 The Dead Space series prides itself on conveying this sense of dread and isolation in the solemn vacuum of space. The concept of having a multiplayer component seemingly defeats this purpose, though developer Visceral Games somehow manages to pull it off in Dead Space 2. The title’s form of team deathmatch pits human-controlled Necromorphs against human-controlled engineers, with each species possessing its own unique attributes, be it biological or technological.

This all makes for quite the interesting series of fights, as there is no telling what arsenal the opponent would have up his or her sleeves. It also makes for a nice departure from the loneliness of the main campaign. Hey, sometimes you need people to keep you company. There’s no shame in that. 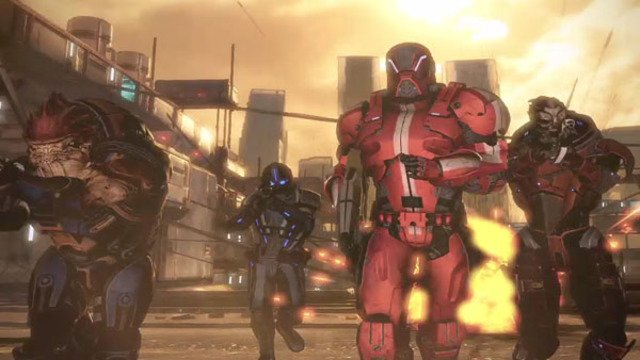 Given the backlash over the ending, many fans would probably argue that Mass Effect 3‘s multiplayer mode is actually better than its single-player campaign. Putting the debacle over the finale aside, Mass Effect 3 offers an onslaught mode that pits you and a group of friends against waves of different enemy types, each shaking up the gameplay in some fundamental way.

A variety of classes and unlockable upgrades makes the experience that much more personalized and additive. Though we probably won’t see another entry in this series for quite some time, at least this multiplayer component is still kicking. 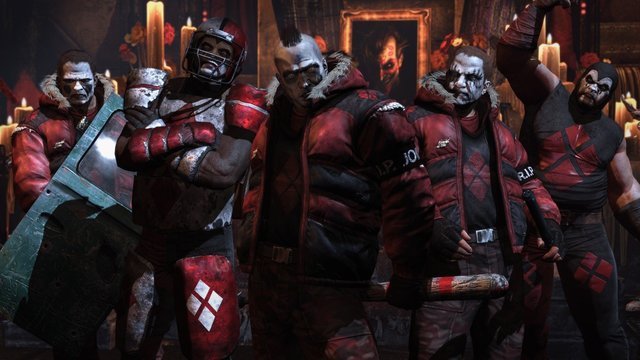 Batman: Arkham Origins introduces players to the series’ first two multiplayer modes: Invisible Predator Online and Hunter, Hunted. Each is unique in that in pits player-controlled gangs against one another while other users fill in the shoes of the game’s heroes or villains. Batman, Joker, Bane, and Robin are all playable, but each have a limited amount of lives (unlike the goons they fight against).

Using the stealth mechanics in a multiplayer setting worked quite well and the asymmetric nature of it made it feel different from most other online titles. The modes make for a unique spin on traditional multiplayer components, oozing that signature Dark Knight charm we’re all patiently waiting for again in video game form.

If you’ve only ever played the single-player portion to any of the titles listed above, do yourself a favor and play their multiplayer modes. Though they won’t add much narrative substance to what you’ve already experienced in the campaign, each is worthy of a shot if only to see how well your skills transfer over among other experienced combatants. If anything, these games showcase how well unique single-player mechanics can transfer to an online setting if done correctly.

All the Scary Horror Games Released in 2022

2022 was a big year for the horror genre in video games. There were plenty of titles willing to deliver…
Originals 3 months ago

Ubisoft is closing the servers for several older games.
News 7 months ago

The Quarry Online Multiplayer Was Delayed Because of Ukraine War

The Quarry online multiplayer modes were delayed because of the Ukraine war.
News 8 months ago