Virtual reality is still coming into its own but it’s slowly propelling into the mainstream as more and more headsets show off what the technology is about. Augmented reality, however, is still in its early stages and companies like Magic Leap are trying to be the ones to push forward in this new frontier. The Magic Leap One is an AR headset that looks similar to Doc Ock’s goggles in Spider-Man 2 but they have a drastically different goal: to bring AR into a brighter light like what Oculus did for VR. And LUNA: MOONDUST GARDEN is one of the early titles meant to complement the new headset. While both are an undeniably early ventures in a new space, they give a decent insight on what this technology is capable of.

Luna: Moondust Garden is a spin-off of Luna, the 2017 VR title that developer Funomena released on PS4 and PC. It’s similarly charming as it has the same art style and characters, but the different medium changes how the game is played. After sliding the small “brain” computer into my pocket and putting on the goggles, Luna’s world overlaid on top of mine. Instead of floating in space and assembling stars like in the VR iteration, Moondust Garden played out over the room I was in and had me placing items around accordingly with its tiny remote-esque controller.

The game focuses on the story of how Fox, who is indeed a fox, has scurried into some unknown hidey hole. Planting items and gathering moondust by aiming the controller unlocks tiny vignettes that give you more of a backstory on Fox and its memory with the associated place. Each plays out in front of you and, given that it is augmented reality, you are free to move about and look at it from any angle you please. 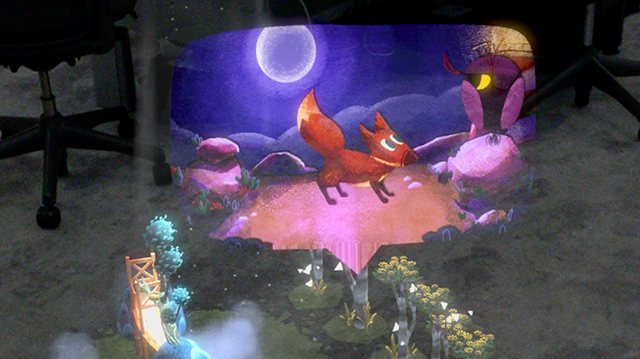 Watching the cute animals tell their stories is reminiscent of the whimsy and tone of Winnie the Pooh but conceptually filtered through The Indian in the Cupboard. Squatting down over this tiny world and looking at it play out is a novel way to experience a story and is something this technology is particularly prepared for. According to Robin Hunicke, co-founder of Funomena, it’s all part of how the game was conceived to do almost exactly that.

“What we really wanted to do with this was get much more at moving around in the world,” she said. “Magic Leap is a spatial computing platform. The idea is that this is just something that you use in space everywhere. So we really wanted to look at the way in which a body moves through space and how we would create a little mobile set that comes alive. It has a consistent scale with your world but when you place things, you feel the sense of creativity in where you put them and how you put them together.”

Creating your own world by planting structures in Luna: Moondust Garden is incredibly simple to do, which might be a turn off for those that want to use their living rooms as a place to snipe demons in AR. The game is more of an interactive toybox and it isn’t interested in skill-based headshots or complicated mechanics and more into letting the players have control over their space and experience a story in slightly voyeuristic way. It’s not particularly complex but it’s suited to the medium, which is the point especially for early software like this.

“So a lot of what we worked on in the project was the delight of placement, the feeling over the tactile quality of being able to wand over the world you created, and getting this feedback from the shapes and characters,” said Hunicke. “Obviously, if we had endless amounts of time, we’d love to do much, much more. A lot of these kinds of projects are about us figuring out what is the juicy space to explore and do research in. And this project definitely inspired a lot of new ideas about three-space computing and being able to be a creator in the world with virtual objects.” 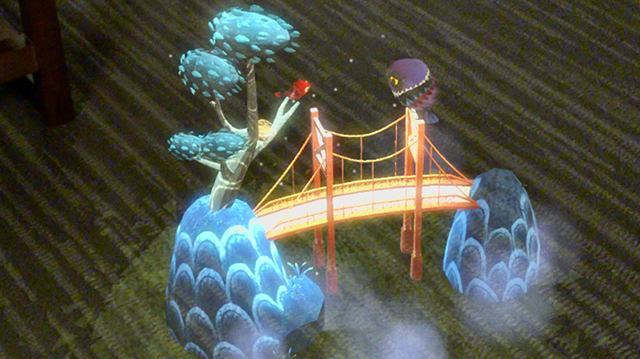 The ingenuity of the Magic Leap One requires this sort of specific small scope. It’s impressive to put the goggles on and see how the goggles intelligently map out the room. I was aiming the laser on people around the room without them knowing, which was both a little funny and something you can only do in AR. And it just feels cool to do that. Although it is not quite as cool as Tom Cruise swiping at menus in Minority Report but it’s also not nearly as bad as, say, Tom Cruise raving about Scientology, which I’m sure is the worst.

Hunicke has high aspirations for this technology to someday reach the heights of Minority Report. She imagines a world where you can use AR to look up as you wake up to see your alarm clock floating above you right before you get up to feed your AR fish and check your AR bulletin board for reminders and possible outfits to wear. It’s obviously a huge leap and one that doesn’t quite seem like it is in the near future. However, Hunicke seems adamant that this science fiction scenario is not as far off as you might think and something her studio is focused on getting to.

“I don’t think it’s that hard to imagine what [complex AR] would feel like but for most people, that’s not how they see the world right now,” she said. “The idea of even just having empty spaces but that through a glasses or contact lenses, there is something there. That is really science fiction right now but it’s not that far away. Getting to this place of imagining these spaces is what Funomena is supposed to do as a company and it’s what I try to do as a designer. And I’m grateful to have the opportunity to do it with something so cutting edge. Because it’s really the future. ” 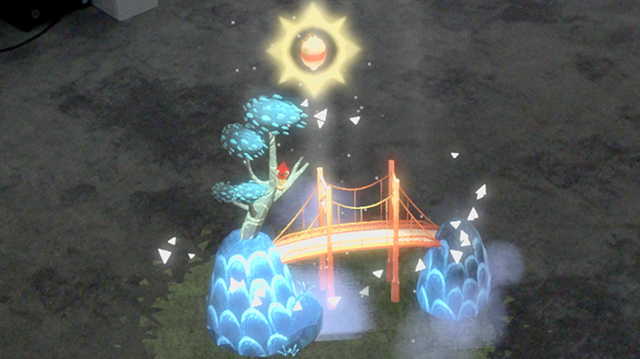 But this future is still not quite here yet, which is evidenced by the shortcomings of the Magic Leap One itself. The screens don’t cover your full eyeball, leaving some gaps for the gross, unaugmented real world. And you can still see each of the models rotate with just an incredibly small amount of rigidity that proves that this technology still has a little ways to go before it hits primetime everyday life.

Moondust Garden is aiming to help the headset on its journey—or AR in general—to that point. It is a low-priced, brief experience that definitely feels like a team proving new piece of technology. Its existence as a spin-off to Luna was partly so Funomena didn’t have to create a whole new world for something on the experimental side. And while the experience is cute and whimsical, there’s a long way to go for augmented reality to reach the astronomical ambitions that Hunicke envisions. Luna: Moondust Garden may lack a huge feature set that some might naively expect and it may be an obvious first step, but, also according to Hunicke, it’s an important first step.

“It’s really, really critical to get very familiar with the core new player experience and the onboarding and for us to understand how people experience this technology from the moment of being very fresh,” said Hunicke. “It’s been critical to do that. We’ve been able to deal with the fidelity and the placement stuff. And so the next thing will be probably other people and a lot more motion, characters, and people being much more autonomous.”

If all first steps in technology could be this adorable, then that would be just fine with me.

Funomena Co-Founder Robin Hunicke on ethics in AR, the future of it, and more [Interview]

Some would say her career has been quite the journey.
Originals 4 years ago