"Because you're whiny little bastards and Santa hates you," I told my kids when they asked me why I got them licensed garbage for Christmas.

They opened Disney Frozen: Olaf's Quest with mixed emotions. They like the movie, but they're smart enough to know that licensed games are usually pretty awful. So how should they feel about my attempt to teach them life lessons?

HEADS UP!
I hid around the corner to listen to their misery as they learned from my tough love, and to my surprise, I didn't hear quite as many groans as I'd been hoping for.

Well, I heard a few more of Olaf's exclamations than I'd hoped for, but not really any misery from the children. In fact, the little bastards seemed to be enjoying some of it, especially the little ones who'd never played a platformer before. They were delighted by the generous amount of float Olaf had, his ability to double-jump, and simple 2D stage design.

They laughed at Olaf's powers, such as throwing his head to stun wolves and retrieve items, or slamming down with a butt stomp while yelling his famous line from Frozen — wait for it — "Watch out for my butt!" Dear gods, does he yell that a lot.

Dismayed, I yanked the 3DS away from them. "Give me that, you little shits," and I started playing it myself.
"You dumb bastards," I lectured, "This shit isn't fun! You sounded like you were having fun. What the hell gives?"
"Wait, were you hiding and listening to us?"
"I'll ask the questions!"
My next question was to kick them out of the room. I kept the game and made sure to play it loudly. 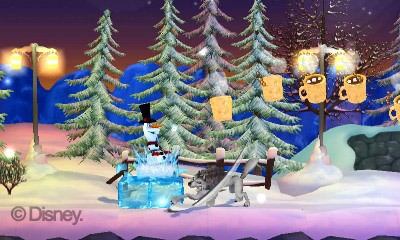 Eventually, it became too clear that I was only playing it to spite my children. No matter how loudly or many times I shouted, "Look at me playing the Frozen game! Look, I'm playing it right now and it's so fun!"

This game was somehow decent for them, but not for me. How? How could it be good for them but not me? Drugs. My kids were on drugs, meaning I had failed. Or succeeded. I don't know. Because when it comes to drugs, some are good and some are bad. There is no way a game can be good for one demographic and not another. If I learned anything in 2014, it's that games are objectively one or the other, and this defies the notion. Criminals. Criminals in my house. Son of a bitch. It got better.
HEADS UP! 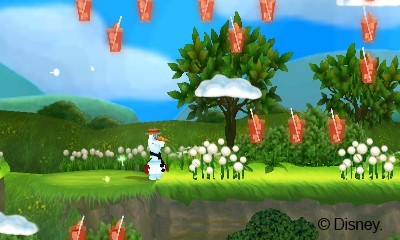 At two points, Olaf is chased by the huge and powerful snowman Marshmallow. If the screen catches Olaf, the stage ends with the horrible penalty of giving you credit for completion. The screen scrolls quite slowly and offers very little ground on which Olaf can stand clear of Marshmallows swiping arms. To pass, you've gotta mush Olaf up against the right side of the screen and just sort of react to that quarter-inch space that you can actually see. I like this one because it teaches kids that they never know what's coming in life, and that making plans for shit does no good. Everything is set to destroy you and the future may or may not be any better. The only way to succeed in this stage, much like life, is to thrust yourself into the blackness, soul first.

I finally saw the wisdom of those children. There were life lessons buried in this skeleton of a good game.
Platforming is incredibly basic, because this is a game for five-year-olds. And while basic, it does actually require the player to think several steps ahead and plan carefully in order to find all of the collectibles. It's remarkable in that way, really. Olaf's Quest is easy from top to bottom, but there are rewards for getting better than the physical mastery of the mechanics and for puzzling out how to reach seemingly (to noobs) unattainable items. 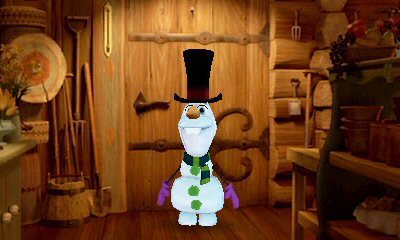 And once you do collect all those flowers and carrots and cocoa mugs and such? You unlock more gloves, hats, buttons, and scarves. Total completion is therefore wholly optional, yet rewarding to those who want it. Sure, it may not contain story segments and only one music track from Frozen, but surprisingly, there's a lot more gameplay value here than in most licensed games.

+ Frozen fan service
+/- Baby's first platformer
– Dying = Stage Complete? That's a bit much.
– Children are smarter than me
+ But I make more money
+ And I would win in a fight

"It's not just another drug show."
Originals 4 weeks ago
9