What do you get when you cross a bear with a bird? Give up? Aw, c’mon, you haven’t even tried any freaky genetic experiments yet . . . okay, what if the bear just wore a backpack that contained the bird in it? More acceptable than the idea of a romantic bird/bear relationship? I figured as much. And so did the folks at Nintendo, who have once again ventured into the realm of 3D platform gaming with Banjo-Kazooie.

The object of Banjo-Kazooie
is simple – rescue your sister from the hands of the evil witch before the witch
steals her youth and good looks. Sound easy? Not likely. In order to accomplish
this feat of daring-do, you have to storm the witch’s castle, travel to various
magical lands, solve puzzles, kill monsters, turn into various creatures, and
be back in time for the 2:30 Country Bear Jamboree at Disneyland. So hop to
it, you lazy good-for-nothing.

Every time someone says that people aren’t using the N64 to its highest graphical capability, Nintendo comes along with a game like this and shakes it all up. The graphics in the game are no less than stunning. Everything is incredibly smooth and well-defined. Droplets of water that fly through the air as you’re running through a puddle each leave their own concentric circles across the glassy surface. There are no noticeable polygonal errors. Truly one of the best graphical displays I have ever seen on a console system.

So the graphics are good, what about the gameplay? Never fear, gentle readers, nobody slacked on gameplay this time. There is a central world around which the action revolves, the witch’s castle. From there, you collect puzzle pieces to open more worlds, to get more puzzle pieces, to open more worlds, etc. Each level has a different theme, from the deserts of Egypt (very hot) to the ice caps of a glacier (very cold). Each level is fairly big and adds to the immense scope of the game.

As you progress through the different levels, you learn new moves that are crucial to your ability to win the game. Once you have all the moves, every button on the N64 controller gets used (except for the L button, because none of us have three arms). Though the control can get a bit confusing at times, and younger gamers might have a problem remembering what does what, you get used to it pretty quickly. 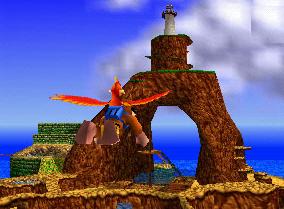 Being a platform game, there is a lot of jumping. As a rule, I genuinely dislike jumping as I’m just not very good at it. But even though the game is jumping intensive, the jumps are easy to gauge due to the beautiful graphics. Though there are some parts where the jumping becomes a hassle, there are usually ways around it if you are creative enough.

With a bird strapped to your back, you’d imagine that you might fly. Indeed, at points you will have to use your feathered friend to reach new heights. The flight is more like falling with style, and it allows you to get a great view of each level.

The sound and music help establish the overall mood of the game nicely. The cartridge format leaves voices out of the mix, but background sounds and other effects are well-done. With the incessant (but delightful) variations of the ‘Teddy Bear Picnic,’ you really begin to feel like you’re wandering around in Bear Country.

The only real problem with Banjo-Kazooie lies in the auto-camera. Though
the camera is one of the best that’s out on the market, it still has some problems.
Some areas confine the camera to a specific point, sometimes obscuring a crucial
enemy. Other times, the camera will not be in the right position to gauge a
jump properly. I’m happy that they included a button that places the camera
directly behind the bear. Without that button, players would have been lost.
Although you get used to some bizarre camera angles as you play the game, it
still can be quite annoying.

All in all, this is the best platform game that I have played in a long time. Of course, it follows the basic formula of a platformer – kidnapped female, evil castle, jump on enemies, etc. But the reason the formula still exists is due to the fact that, occasionally, it works really well. Banjo-Kazooie is a case where the cliche works to perfection. Although we question Nintendo’s blatant violation of the genetic cloning ban put in place by the president, they did so for a good cause, and a damn good game.

Bigger and best.
Tech 7 days ago
6