A Tale of Two Wrestling Games.

“Alright, guys, listen up!” the head programmer addresses his minions, “We got the license to
put out a WWF game.”

Cheers erupt throughout the meeting room. Even programmers know that professional
wrestling is the hottest thing to hit the video game market since a little Italian guy got famous
fighting a giant gorilla.

Vince McMahon enters the room, looking like the pimp that he is. “I just want to make
perfectly sure you understand the task at hand,” he says. “Right now, the WWF is like Avis
Car Rental.”

Everyone around the room exchanges puzzled looks.

“We try harder.” McMahon quips. “We can’t afford to lose anymore wrestlers or viewers to
the WCW so you guys need to put out the best damn wrestling game there is.”

“No problem.” the head programmer says smugly. Heads all around the meeting room nod
in approval.

“What’s that?” the head programmer inquires.

“Stone Cold Steve Austin will be your new game tester. He will personally guarantee the
quality of the product.” McMahon informs them, an evil grin spreading across his face.

“A…and if he doesn’t approve?” the head programmer stammers.

“You heard of the Stone Cold Stunner?”

“Yeeeeeehaw!” erupts an obviously impressed Stone Cold as he finishes off yet another
opponent for the title belt.

“Uh…so you like it, Mr. Cold?” the head programmer inquires cautiously.

“Hit the nail right on the head, son.” Stone Cold says, never taking his eyes off the game,
“This game’s ready to ship.”

“Um…we were thinking of improving the…”

“What?!” Stone Cold interrupts, getting up and flexing his biceps. “Did you hear what
I said?! This game’s ready to ship! ‘Cause Stone Cold said so. Now get movin’ before I
break out a can of whoop ass and give you the ass whuppin’ of your life, son.”

So are the origins of WWF War Zone, and Stone Cold saw that it was good.

The Head-Honcho of THQ addresses his development staff, “Alright, guys, we’re supposed to
put out a new WCW/nWo game.”

“Again? I thought WCW vs. nWo would last us for a while.” The programmer says,
puzzled.

“Yeah, but ever since that WWF game came out our sales for WCW vs. nWo have dropped off
75%!”

“Alright, alright, we’ll get to work.” The programmers disband, grumbling.

Head-Honcho’s secretary bursts into the room. “I just got off the phone with Hollywood
Hogan!”

“He said, and I quote, ‘I better have the biggest arms in all of video games, brotha.'”

“Yeah, yeah, he sounds like a broken record. Maybe he should change that to
the biggest head …” Head Honcho says disgustedly. “Just tell the programmers
to modify the WCW vs. nWo engine and see what happens.”

“What should I tell Hogan?” the secretary asks.

“Just tell him to wait and find out.” Head Honcho retreats into his office.

And so WCW/nWo Revenge was born.

Two top-notch wrestling games vying for console bragging rights. A veritable clash of the titans not seen since PSX vs. N64 or Madden vs. Gameday or even paper vs. plastic.

Revenge is an excellent game in its own right and quite different from
War
Zone. It all depends on what you expect from a wrestling game. Revenge
is geared towards the hardcore wrestling fan who catches every Monday Nitro
and shells out for every pay-per-view event, and the game captures each venue
beautifully. War Zone is more accessible to the everyday gamer and familiarizes
you with the world of professional wrestling. This is evidenced through War
Zone‘s full wrestler bios, in-game commentary, and crowd noise like you’ve
never encountered in a video game before.

Revenge features over 60 wrestlers, each with multiple outfits to choose
from (caveat emptor: Not all 60 characters are full-fledged WCW wrestlers.
Looks like the programmers took a page out of War Zone and included some
of their own custom creations.) The characters’ bodies look a little disjointed
and not as smooth as those in War Zone. It looks as if someone animated
those little wrestling action figures you can get in toy stores. There’s very
little body-size differentiation and almost all the wrestlers have huge world-class
bodybuilder physiques (yes, Hogan got the biggest arms in all of video games,
but so did everyone else in his weight class).

Veterans of WCW vs. nWo will pick this game up intuitively, but for
the rest of you, the controls take a little getting used to. Instead of complex
D-pad and button combinations, most of Revenge‘s moves come from short
or long presses of the A-button followed by another button combination. For
example, to do a vertical suplex, you would press and hold the A-Button to get
your opponent in a ‘strong’ grapple, then press down and B to do the move. All
the wrestlers work off the same button combinations, but they’ll do different
moves.If the above example is Wrestler A’s move for a suplex, Wrestler B might
do a power bomb instead with the same combination. So you can see the move variety
is little more limited than War Zone as well as being more random.

Life is measured by a “spirit” meter which depicts “a wrestler’s mental state
and adrenaline.” Pulling off lots of moves without getting pummeled will cause
the meter to gradually turn red. The redder the color of your meter, the more
powerful you are and the closer you are to pulling off a special move. At the
other end of the spectrum, if your meter starts turning blue, you’re in trouble
and dangerously close to getting pinned. I found the whole spirit meter thing
to be wholly subjective according to the game’s wishes. Several times I’ve thrashed
an opponent in the first 1:30 of the match, with his meter reading “danger”
and mine at max, but the computer wouldn’t let me pin him until the match went
to 4:00 or more. The life, pain, and hold meters in War Zone are a lot
more intuitive and objective. 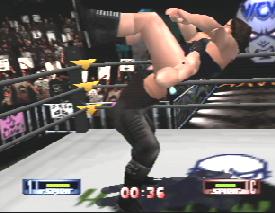 Realism factor: Ahh….this
is where Revenge really shines. All the wrestling venues are accurately
reproduced and look absolutely fantastic. Fog and multi-colored lights surround
each wrestler as they make their grand entrance into the ring, followed by the
necessary and wondrously colorful pyrotechnics. Wow, THQ really did their homework
on this one. It’s as if you’re actually watching the event live. The crowds
still look like a bunch of cardboard cutouts, but that’s nit-picking. War
Zone graphics pale in comparison.

Also gone are the tedious “Grudge Matches” that were all over War Zone. Instead, if you’re kicking the computer’s butt badly, a random run-in will occur. Some characters such as Sting make an
awesome entrance (he glides down majestically from the ceiling, baseball bat in hand) while
others merely run into the ring. If you’re not careful, the two computer-controlled opponents
will team up on you for some BIG moves. Makes single-player games a bit more fun and a
lot less tedious than War Zone.

Revenge‘s detailed motion-captures look fantastic, although the characters move a little slower
than in War Zone. The biggest offender is the vertical suplex move, where your character
will hold his opponent in the vertical position for a full five seconds before slamming him to
the mat. It’s great for show-boating and dramatic effect, but it sucks when you pull off the
move by accident and you only have three seconds left before a ring-out DQ. You’ll find
yourself mashing buttons and screaming “Just drop that mofo already!” … but to no avail. The
smaller graphical details also enhance the authenticity of the game, with unconscious players
twitching on the mat and with “hurt” opponents grabbing the small of their back in mock
pain.

Computer AI may not be the best in the biz, but offers some great variation that War Zone
lacks. Computer opponents sometimes “play ‘possum”, lying on the mat as if they were
unconscious. So you jump off the top rope to finish him off and just before your elbow
smash connects, he kicks up his feet and all of a sudden the punisher becomes the punished.
Too sweet. Great for catching your friends off guard and turning the momentum in your
favor during multiplay. 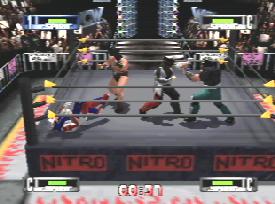 One of the best parts
of War Zone is the sound – the crowd gets to be the 12th man (for lack
of a better term) and the in-game commentary is great. No one would ever mistake
the sounds in Revenge, however, for a real wrestling match. The music
really makes playing the game tedious. How bad is it? Try this experiment. Invite
one of your guitar-playing friends over while you play your all-time favorite
game with the sound off. Then tell your friend to start mashing out heavy metal
glam-rock chords. We’ll see if that remains your favorite game or not. The music
drowns out almost every other sound in the game and makes what would otherwise
be pleasure into a chore. I didn’t know Motley Crue was the official band of
the WCW!? Luckily, the music can be turned off in the options menu and I wholeheartedly
recommend that you do so.

Options abound in Revenge. Compete for any one of five authentic WCW
belts including U.S. Heavyweight, Cruiserweight, Tag Team, World Heavyweight,
and TV title in any one of six regular TV and pay-per-view venues. Modes include
Exhibition, where you can practice your one-on-one or tag-team tactics; Special
Match which includes a 4-40(!!!) man Battle Royal as well as two-on-one Handicap
matches; and a Costume Change where you can change outfits for all the wrestlers,
making custom color creations and also edit the names. However, this last option
feels like a last-minute, half-assed attempt by the developers to come up with
something like War Zone‘s fabulous Create Player mode.

As expected, the true power of Revenge lies in multiplayer, brotha.
Just as fun as War Zone, but with all the kinks worked out. Changing
partners in tag-team action is as easy as facing your partner and pressing C-Up,
much easier than in War Zone. Also, the C-Right button allows you to
target different opponents in multiple-wrestler matches. The computer in War
Zone is extremely stubborn in which opponents you could fight in the Royal
Rumble. Now, you’re free to decide for yourself.

Revenge is a simpler game than War Zone. When I won my first
title belt, I did nothing but mash buttons as fast as I could and hoped for
the best. Trying the same tactic on War Zone will only succeed in getting
you booed out of the ring. The better of the two games really depends on the
type of gamer you are. If you want to recreate every wrestling event and you
also like some serious button-mashing, pick up Revenge. You two are a match
made in heaven. However, if you’re into a little more finesse and methodical
gameplay as well as an all-encompassing experience (top-notch graphics and sound),
you can’t go wrong with War Zone. As for my personal pick, I’d have to
say that Revenge will probably be sitting around my room collecting dust
until I get tired of War Zone.

Embarrassing for all involved.
News 22 hours ago

A full list of Steam discounts for TGA 2022.
News 2 months ago