Barbarian is about to die. Review

Barbarian is about to die.

As one of the lucky millions who can vividly remember the “Golden Age” of gaming
in the early eighties, I have discovered that certain archaic sound bites are
permanently etched in my memory. In the middle of a perfectly normal workday,
I’ll suddenly start humming the cutesy theme track of Burger Time. Or I’ll
be strumming a guitar and miraculously reproduce the ‘wocka wocka’ of Pac-Man
eating some dots. Is that wind and rain outside, or is it that cheering sound
from Intellivision Baseball?

But to this day, no aged sound bite brings a smile to my face like a hunger-driven mantra from days past, a rumbling from the pit of a warrior’s stomach, an urgent plea for sustenance else all hope is lost and another quarter be sacrificed….

If you’re confused, then you have certainly never played Gauntlet, the
first truly cooperative multi-player arcade game. Set in a dungeon and supporting
up to 4 players simultaneously, Gauntlet raked in a ton o’ dough. In an
effort to bring the Gauntlet style of gaming into the new era, Monolith
gives us Get Medieval, a tongue-in-cheek recreation of the 80’s dungeon
masterpiece.

Get Medieval basically
takes all of the gameplay and graphical elements found in Gauntlet and turns
them up a notch. You can choose one of four characters: Eryc the Archer (Elf),
Kellina the Avenger (Valkyrie), Levina the Sorceress (Wizard), and Zared the
Barbarian (uh…). Each character has specific strengths and weaknesses — Zared
is strong but slow, while Eryc is weak but quick. As in Gauntlet, the
character balance plays a big role in the multi-player aspect and adds strategy
to an otherwise strictly arcade game.

One of the biggest problems with Gauntlet was the complete lack of
a plot. In fact, you could play the game for years and never reach an ending
– it seems they forgot to make one. Realizing that this kind of monotony won’t
satisfy today’s gamer, Monolith threw in ‘Dragon Quest’ mode. Here you attempt
to progress through 40 levels of dungeons, complete with boss characters, until
a final confrontation with Daramil, the evil Great Dragon who rules the dungeons
and engulfs the kingdom in flame every so often.

Gameplay is pretty much identical to Gauntlet. You run around in a
top-down view hurling your weapon at monsters, collecting treasure, power-ups,
keys, scrolls, and of course, food. Well, not exactly food – more like little
buckets of blood that replenish your life. Same idea, anyway.

The number of monsters in these dungeons is immense, thanks to those pesky
monster generators. Yep, they’re back too, and you better make sure to wipe
’em out if you want to permanently kill off some of the beasties. Speaking of
which, there are 20 creature types and 8 bosses (one every 5 levels), significantly
more than in Gauntlet.

Graphically, Get Medieval seems to know its place. All characters are
well animated sprites – no polygons whatsoever. There are some nifty little
lighting effects and color filtering, such as sparks and explosions. The framerate
is pretty high and the game runs smoothly. There’s also a nice bit of gore when
you kill things. Again, it really just looks like an updated version of Gauntlet
— nothing particularly new here. 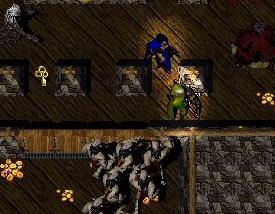 The sound in general is good, with all the clinks and clangs you’d expect from a dungeon romp. The uber-scary voice that describes your exploits is great – “Devastation…mwahahaha!” Very dark and brooding. Hehehe. On the downside, I noticed some weird bugs when trying to play the FMV movies – sound skipping and what not. This is acknowledged by Monolith and will probably be fixed in a patch, but still, final products should be bug free.

The muliti-player element that made Gauntlet such a success is here
as well, though with mixed results. There are a few ways to play with others
– LAN, Internet, or on the same computer. The last one here is great. Just find
a few friends, grab a few chairs, and cram yourself in front of the monitor.
Up to 4 can play via 2 on the keyboard and 2 with joysticks. Since you’re all
at the same CPU, it flows effortlessly (albeit a bit crowded).

Playing over the Internet, however, is a bit more tricky. Unlike most new titles, connecting and playing online isn’t as smooth as it could be. There’s no ‘gathering place’ (i.e. dedicated server area) to find opponents. Instead, you have to know the IP address of whoever is hosting the game, or if you’re hosting you have to give your IP address out to the other players. This means you have to know other people with the game, which in a way defeats the whole purpose. Surfing the chat rooms for other game owners is not the easiest nor most efficient form of multi-player gaming.

In all, Get Medieval is a nice update to a classic game. It understands its limits and accepts its fate with wry humor. If the multi-player element was more effective, this would have been a much better game. Any old timers out there with LAN access should definitely look into this one.

New additions include Persona and Stranded Deep.
News 4 weeks ago
8