During the past year I’ve spent over 80 hours playing Elite: Dangerous. As an astronomy enthusiast, I was gripped the moment I entered my first spaceship and observed my seemingly boundless surroundings.

Over time, I’ve come to learn that there is no substitute for Elite: Dangerous, with its gameplay flaws and all. It’s an extraordinary game that has gone where no modern game has gone before, and now that experience is available to a new audience thanks to a PS4 port.

The Vastness of Space 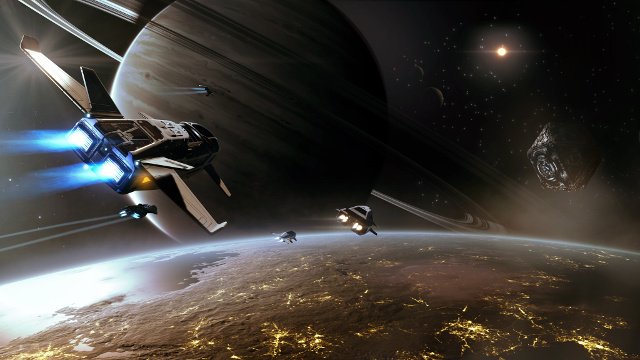 Set in our very own Milky Way galaxy, Elite: Dangerous‘ world is familiar and vast. Billions of star systems pepper the galaxy, surrounded by beautiful nebulae, diverse planets, and the ominous presence of black holes.

Unlike most games, everything you see around you can be visited. In some cases, this might be a neutron star shining brightly in the distance. Or, on a more functional level, this might be a starport that you would like to dock at to refuel and invest in new equipment. For all intents and purposes, this is a massive playground where you can fly in any direction you desire.

This playground serves as the perfect place for Elite: Dangerous‘ freeform gameplay approach. From the onset of your journey, you are free to do whatever it is you desire. Many players focus on bounty hunting in the rings of massive gas planets to enjoy high-intensity combat with visually stimulating backdrops. Others prefer to serve as a bus driver of sorts, ferrying NPC characters across star systems for a monetary reward, and plenty of screenshot opportunities. Others spend a great deal of time on the economic side of the game, buying low and selling high with massive freighters.

The attention to detail is something many players might overlook, but deserves recognition. Newtonian physics, calculus, and other mathematics were utilized during the development of Elite: Dangerous to craft something that emulates the Milky Way at a level of precision never seen before. At the very least, it’s worth thinking about when you enter hyperspace to jump to another star system.

For those who enjoy carving their own path, there is nothing quite like Elite: Dangerous. There’s a genuine sense of exploration and discovery that is not often found in modern video game design. 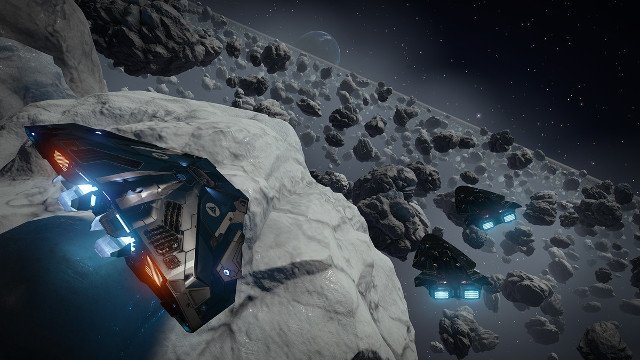 Once you escape the gravity of Elite: Dangerous‘ impressive world, some of its shortcomings reveal themselves.

The main point of contention with some players is the structure of Elite: Dangerous‘ gameplay loops, and more specifically how repetitive they can be. Traveling to the galactic core requires more than a dozen hours of manually using your frame shift drive to jump from one star system to the next, with little else happening in-between—a consequence of the game’s realism. For players who are more combat inclined, battle with NPCs doesn’t evolve in any particularly meaningful way, and it takes a very long time to accrue enough money to purchase any of the more attractive ships (Vulture, Anaconda, Corvette, etc).

This will prove disastrous for many gamers who enter expecting a more streamlined game with accessible reward progression. Elite: Dangerous doesn’t often give back a whole lot, or at least not in a consistent manner. This is a game where you have no choice but to derive your own enjoyment.

Although this has, and will continue to be, a deal-breaker for many gamers, it’s a nice change of pace from most others games in the modern era, and just means that the game isn’t for everyone. Even then, everyone can at the very least admire how visually stunning the game is, finding value in spending a few hours flying around and taking screenshots. 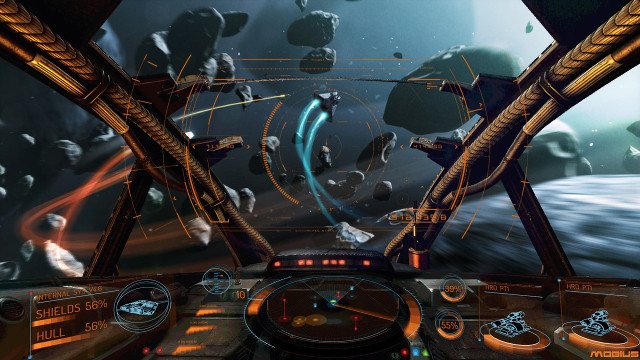 Similar to the Xbox One version, the PS4 port of Elite: Dangerous is well-crafted. Despite the game’s technical nature, all interactions can be bound to a combination of face and shoulder buttons on the DualShock 4. Flight and combat feel great in the hands, with no limitations other than the lack of head-tracking.

Where Frontier Developments has done a particularly great job is in delivering parity across all three platforms. Although the Xbox One version originally was an update or two behind PC, it has since caught up. PS4 has debuted with all the latest and greatest additions of the title, including the ongoing Thargoid presence.

PS4 Pro is supported with Performance/Quality options. Those who play on a regular PS4 will still witness some of the best visual design in the space sim genre, one of the game’s greatest strengths.

It should be mentioned that multiplayer functionality has evolved since the debut of the game on PC. Creating Wings—which are a fancy word for groups or squads—is accessible, and has several implications that are a great way to mix up the experience. Just don’t go in expecting an MMO, because this isn’t one.

Elite: Dangerous has come a long way since its debut in 2014. It’s now a much more complete product, making it an attractive option for PS4 gamers who have the urge to leave Earth and see what the Milky Way galaxy has to offer.

This isn’t a game for everyone. Those who are unfamiliar with sandbox design should take caution as its gameplay loops can be often unenjoyable. Though, for the gamer looking to break free of the linear shackles of modern game design, and enjoy exploration in its finest form, Elite: Dangerous is a game with no substitute.