War… Huh. Good god, y’all. What Is It Good For? Review

I’m sorry parents, friends, and major religious figures, but I’m about
to advocate war. There are far too many boring games that suck in this world,
and I am actually grateful when I am given the chance to blow the head off an
enemy. I’m happy that Army Men 3D gives me that chance to kill someone,
even if they are made of plastic.

The
Tans have waged war against the Greens again and they’re attacking in force.
You play Sarge, the Green army sergeant, and you are fighting back, Rambo-style.
HQ needs you for various missions ranging from saving captured Green troops,
recovering secret information, sabotaging Tan equipment and generally just kicking
Tan tail.

To aid you in your missions, you are armed with an arsenal of weapons, including
bazookas, grenades, flame-throwers and a bunch more. Also, there are several
vehicles that you can use to run over people or blow up things. Groovy.

Creeping around and evading enemies proves that war can be fun and easy.
Okay, maybe not easy, but not super difficult either. You’ll find, however,
that even after you get the hang of the controls, you’ll still feel a bit limited
in movement. I spent a lot of time sitting behind rocks wishing I was able to
strafe, a move that has become common in most other games. Also, the vehicles
are very difficult to control and often hinder, rather than help the missions.

Creeping around Tan territory gave me the eerie feeling of being alone in
a real war, a feeling aided by the best bits of the ‘spooky’ music in the game.
Unfortunately, the music mix could not always produce that sense of impending
doom. While the military-style music was good, some of the “smurfy” kids tunes
were irritating. 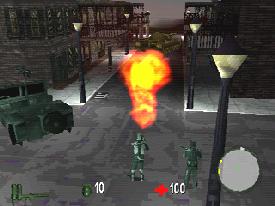 Let
me just say this: I got hooked on Army Men 3D. I liked the feeling of
taking on an entire army of Tan bastards. Even when I died and had to start
the mission over, I eagerly tried again. I’m not saying I did not get frustrated
(believe me, brother, I did), but I had fun. It’s too bad that the game is so
short (about 18 levels), because I really wanted more.

And it took me a while to get hooked because of the worst part of the game:
the graphics. I was able to become accustomed to the lousy graphics because
I enjoyed the game concept, but I’m sure others will not be as forgiving.

The graphics are murky at best. It is often difficult to determine whether or not the object in the distance is in fact a stationary Tan soldier or just an innocent cactus.

The game camera also poses some problems. The camera follows Sarge, but sometimes canyon walls, high brush or trees get in the way and cover the screen. I enjoyed the perspective, but sometimes had to wiggle around until I could see again. Often this would result in my getting shot. And getting shot is never cool.

I feel that this is one of those cases where one should not judge a book by
its cover. There is so much good stuff hiding under those sketchy graphics and
awkward movements. But graphics and control are also key to a good game. So
despite the fact that there is no other game like Army Men 3D out there, in
the end I can’t give it a strong recommendation.

The best we can hope for is a sequel with better graphics. Until then, I can
only reenact war in my mind. Oh well, I guess you can’t have your war and fight
in it too. Go War!

Fun and Challenging Get to crawl around in the dirt, Commando style Poor graphics. Vehicle movements are sketchy. Too short.
Today

Fun and Challenging Get to crawl around in the dirt, Commando style Poor graphics. Vehicle movements are sketchy. Too short.
February 3

Fun and Challenging Get to crawl around in the dirt, Commando style Poor graphics. Vehicle movements are sketchy. Too short.
February 10

Fun and Challenging Get to crawl around in the dirt, Commando style Poor graphics. Vehicle movements are sketchy. Too short.
February 21

No one can hear you scream.
Games 9 hours ago
9

Bigger and best.
Tech 6 days ago
9