A dash of Sim, a sprinkle of Action, a bit of Road Rage… Voila! Perfect racer! Review

A dash of Sim, a sprinkle of Action, a bit of Road Rage… Voila! Perfect racer!

Over the more than five years of their existence, Electronic Arts’ Need For
Speed series has always had a tumultuous relationship between its gameplay
components: arcade and simulation.

Lady simulation flew, or better yet, drove solo in the first title, Need
For Speed, released on the flagship 32-bit system: the 3DO. The game was
pretty to look at and presented a unique racing experience, but it was too damn
slow. The word “Speed” on the front cover mocked the game’s buyers (fortunately,
since it was on the 3DO, there weren’t too many of those). It was a racing game
that felt like members of the Gray Panthers Party had robbed a European car
showroom and entered grand prix races around the globe. Simulation and Arcade
met up on the PlayStation release of the same game, where speed was increased,
new tracks were added and the game was now indeed fun.

In Need for Speed 2 however, Mr. Arcade decided to have his revenge,
and left simulation doing math at the drawing board. As a result, the game had
shorter tracks and little of the traditional NFS realism, adding up to another
less than engaging racing experience.

Simulation
took over to create NFS:
V-Rally. The game was speedy, but the cars reacted too realistically and
would often flip over with a quick tap of the D-Pad. Simulation and Arcade finally
resolved their differences last year (with the help of a counselor) and joined
forces for NFS
3: Hot Pursuit. Both elements blended together seamlessly, creating a game
with fast and exciting races, exhilarating cops and robbers style chases, all
while retaining realistic car handling and a nice (if a little forgiving) physics
engine.

Today, the couple are still “so happy together.” The latest release in the
series, NFS: High Stakes, is all of the game Hot Pursuit was and
then some.

The game’s setup is similar to NFS 3. You have the options of playing
time trial, single race, hot pursuit, tournament and a new mode: high stakes.
Time trial and single race are commonplace on all racers, and High Stakes‘
versions vary little in setup from previous titles in the genre. Hot pursuit
is the same great mode offered in NFS 3, where you can either evade the
“five-0,” or join the pigs and catch the bandit yourself. Although basically
unchanged since NFS 3, hot pursuit mode’s thrills feel as fresh as it
did a year ago because of a more hostile computer presence.

Tournament again, is similar to NFS 3, but where those old races lagged
at times, High Stakes has solved the problem by reducing races to two
laps. This benefits the game by making racing considerably more aggressive.
Races are almost always neck to neck, forcing you to pull off some tricky maneuvering.
The final and new gameplay mode, High Stakes, is the closest thing to computerized
gambling the PlayStation has created. In the mode, two players insert their
memory cards into the system and load their best cars. Players race and the
loser gets his or her car erased from the memory card. Ouch.

Car selection in High Stakes is comparable to NFS 3, with similar
but updated versions of the cars. Cars range from the speed freak Lamborghini
Diablo SV, to the monster of a machine the Mclaren F1 GTR, to a freakin’ American
tradition: the new Corvette. Cars are beautifully rendered in all their polygonal
glory, with exacting detail, topped off with nice glossy finishes.

Once the asphalt is under your wheels and the race is underway, video game
driving realism takes on a new meaning. As the speedometer jets past regular-law-abidin’-folk
speed, enters drag race status and finally peaks at speeds that would make Indy
Racers wet their pants, the console driving experience is defined. Races are
fast and are rarely, if ever, sluggish.

Though arcade-ish in its gameplay, High Stakes contains many more sim elements
than NFS or NFS 3. In tournament mode for example, each race win
earns you a certain amount of money. This money can be spent to upgrade your
existing car (improve suspension, acceleration and handling), or once a tournament
is completed it can be used to purchase a new car. The one downfall to this
is that players can race the easy tournaments that they have already won with
their new souped-up rides, over and over again. Money can be accumulated and
this dough can be used for an unfair advantage, by using it to buy all the car
upgrades for following tournaments.

Along with the money element, for the first time in the series, High Stakes
includes car damage. Running in head first to the side of cliffs at 250 Mph
has consequences in the game, and all of the damage you put your car through
is equated into a repair bill (where the money comes out of your pocket). This
causes you to drive more cautiously and (gasp!) use the brakes. However, the
damage system isn’t without its flaws. I’ve tried repeatedly, and no matter
how many times I crashed the cars, no more than $12K was ever needed for repairs.
You can’t even replace the cigarette lighter in a Ferrari for $12k. 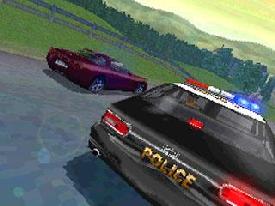 Car
handling in High Stakes is very sim based, more so than NFS 3.
Cars feel distinctly different from each other, and all factors such as car
weight and frame design affect handling. When cars have to make sharp turns,
they require a precise alternation of braking and accelerating. For example,
too much braking with no acceleration will cause massive spin outs. Unlike Ridge
Racer type racers, the cars in High Stakes don’t ricochet when they
crash into walls, instead they come to a complete standstill and must be put
into reverse.

Car collision also takes on sim characteristics. When your car is bumped on
its side by an opponent, it will usually begin to fishtail. If you try to fight
the swerving motion of your car by steering back and forth, a spinout isn’t
uncommon.

More than the added sim and realism, the greatest improvement over NFS 3
is High Stakes‘ advanced computer AI. Gone are the days when the computer
opponents would let you pass them if you were cruising at a higher speed. In
High Stakes, when you begin your attempt at passing, they react and swerve
in your direction. And if you happen to make it side by side with them, they
will ram into you before you can scream mercy.

The new computer AI makes the races rock. You simply can’t win by only
racing well and not hitting the sides. You must develop strategies of maneuvering
between opponents and must learn how to combat the especially stubborn ones.

To add to an already complete package, graphic detail in the game is phenomenal.
From rugged outdoors of Canada with exquisitely rendered tunnels and bridges,
to the lazy small towns of Germany with fluid windmills and elaborate houses,
every detail is created perfectly. Locations have much more detail than previous
NFS installments and many more light sources are present. The look of
each setting is mesmerizing and helps create an immersive racing environment.

But because this is the PlayStation, greater graphical detail means a lower
frame rate. High Stakes‘ frame rate is noticeably slower than NFS
3‘s, and all too often the slowdown creeps up and detracts from the beauty
of the game’s visuals.

Need For Speed: High Stakes is a riot of a racer. In my books, it rates as
the best racer on the PlayStation. For diehard simulation fans, Gran
Turismo is still the king. High Stakes has many sim elements but
it’s definitely a mesh with arcade. However, as many may know, Gran Turismo
ain’t much in the way of thrilling action or multiplayer (It’s not extremely
fast and there are no real crashes or damage). In the end, High Stakes
is just more fun.

I feel the need, etc.
Games 4 months ago