Fortunately, developer Camelot Software Planning went back to the drawing board for Mario Tennis Aces and pulled what was great about past entries into the new game while also adding some entirely new features. The result is a dramatic revitalization of the series that shows Nintendo’s commitment to produce quality titles for the Switch outside of their mainstays. 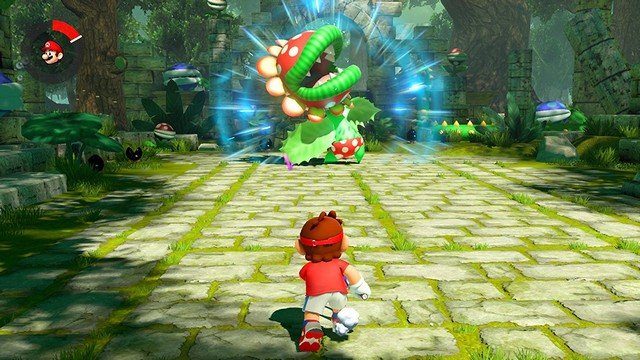 The most significant addition coming from Ultra Smash is the Adventure Mode. Fans have been wanting a full-fledged, RPG-style adventure since Mario Tennis came out on Game Boy Color, and they’ve finally got their wish. The Mushroom Kingdom is obsessed with tennis for the purposes of the game’s plot. In the middle of this tennis-themed renaissance, an event Tennis god named Lucien is awakened by Luigi, and it takes control of him, Wario, Waluigi, Bowser, and others.

To save the Mushroom Kingdom, Mario must journey the land and collect four Power Stones to lift Lucien’s curse. There are a ton of obstacles in Mario’s way, all of them tennis-themed, and he’s going to have to work those elbows to save the day. Luckily, he’s not alone. Toad is along for the ride, and is your ever-present companion, dispensing advice throughout the adventure.

The plot isn’t nuanced (not that any Mario games are), but it’s serviceable and gets you on your way. Adventure Mode takes place on a world map, and you follow a fairly linear path to find the Power Stones. Each level requires you to complete a tennis-related task to finish it. This might be as simple as competing in a tennis match, or complex like solving puzzles by hitting a tennis ball off of things in a particular order. 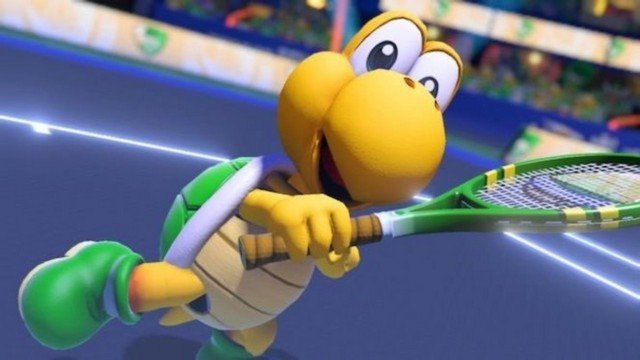 Not only your skill and reasoning ability will be tested though. Tennis is about keeping up the volley, and some of the stages in Mario Tennis Aces‘ Adventure Mode will challenge your endurance. Most Mario games are designed with both children and adults in mind, but Mario Tennis Aces difficulty level is much higher than most Nintendo fare. Your AI opponents are absolute monsters at the sport of Tennis, and it took me an hour or more of retries for some of these levels.

One level in particular where you have to score 300 points by keeping up a volley with a Boo was incredibly frustrating. You have to complete the task without missing the ball more than three times. If the Boo scores on you three times it’s over. Considering you only get one point per volley (with bonus points every ten hits in a row) it becomes more of a luck thing than a skill-based competition. When you hit the mid-game, the AI always seems to have the advantage over you when it comes to movement speed and energy, and they’re able to smack the ball with incredible force multiple times in a row. I enjoyed Adventure Mode and was ecstatic at its inclusion, but sometimes the difficulty ramp is noticeably too steep.

Fortunately, even when you lose, Mario’s stats level up and slowly, but surely you’ll eventually overcome what’s thrown at you. Another help is the different rackets you can earn throughout the game that increase your attack, defense, and durability as well as allow you “extra life” when an opponent breaks your racket. 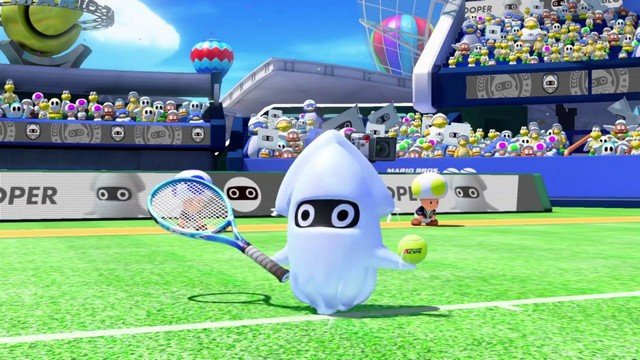 The gameplay in Mario Tennis Aces is similar to Mario Tennis: Ultra Smash. You have tennis standbys like the topspin, slice, lob, flat, and drop shots. There are also special abilities you can use that are dependent on an energy gauge. You can fill the gauge by hitting the ball with partially or fully-charged shots or by completing one of the new Trick Shots that allow you to cover a small amount of the court instantly and hit the ball.

The first new special ability and arguably the most useful is the Zone Shot. As you charge your gauge, you’ll see stars begin to appear on your side of the court. If you place your character in them and hold ZR, you’ll get a first-person view and get a limited time to aim at the opponent’s side of the court. The only real defense against the Zone Shot is the second new ability, Zone Speed. This allows you to slow time by holding a button to allow you the chance to maneuver. It takes precise timing to deflect a Zone Shot and unless you’ve got superhuman reflexes the only way to accurately hit a ball that has been Zone Shotted towards you is with Zone Speed.

Special Shots are a new ability that act as a character’s ultimate ability. They become available when your special gauge is charged completely and work a lot like the Zone Shot. When you execute a Special Shot in Mario Tennis Aces, you’ll get a first-person view. The thing that’s different with Special Shots, though, is that if your opponent tries to return the shot without the right timing, you can pulverize their racket. That brings us into the last significant new gameplay mechanic: racket breaking.

Each character has a limited amount of rackets available. Hitting Zone Shots without the proper timing will take off 1/3 of a racket’s health while hitting a Special Shot without the correct timing will destroy a racket instantly. If a character runs out of rackets, it’s an instant win for the opponent. This adds a new element of strategy to the series as sometimes it’s actually a better move to let someone score on you than attempt to return a shot that could crack your racket.

There’s also a separate mode, which is a bit of a novelty, called Swing Mode. Swing Mode allows you to pantomime a tennis racket using the Joy-Cons. It definitely brings back fond memories of the Wii, but it’s nowhere near accurate enough to use as anything other than a fun distraction when playing with a friend.

The multiplayer modes are where most players will find their fun. Adventure Mode is fun, but Mario Tennis is about competing with real people. You can play in Freeplay in singles or teams and you can either enter matchmaking and get paired with online players, invite friends over the net, or play with up to four players in local play. You can also play one-on-one and pairs with two Switch consoles that is a dream come true as far as the camera goes. Four players on one screen gets a bit too chaotic, but pairs on two separate screens feels just right. There’s also a Simple Mode which strips out all the fancy special shots and abilities for a round of pure vollying.

There’s also a tournament mode that allows you to enter a three-tier competition. Matchmaking pairs random players against each other, and it’s a fight to the center of the bracket. This was my favorite mode since it let you get right into playing one-on-one for multiple matches without having to return to the menu to start matchmaking against. Unfortunately, multiplayer is missing options to change match length, which is a down note for an otherwise robust offering.

Mario Tennis Aces is a move in the right direction for the series and is a great way for Nintendo to show that they’re taking even their secondary franchises seriously this console generation. There were quite a few games like Mario Tennis: Ultra Smash on the Wii U that were far below the par fans expected. This game, though, will be played for years to come as it’s not only an excellent Mario Tennis game, it’s a superb Tennis game in general.

I would have liked to have seen a more smooth difficulty ramp in the Adventure Mode, and more options when it comes to multiplayer matches. However, those are things that can be fixed with patches, and fundamentally Mario Aces Tennis gets things right much more often than it gets them wrong.

Adventure mode makes a welcome return after being absent in Ultra Smash. Local multiplayer has a ton of options on…
Today

Adventure mode makes a welcome return after being absent in Ultra Smash. Local multiplayer has a ton of options on…
February 3

Adventure mode makes a welcome return after being absent in Ultra Smash. Local multiplayer has a ton of options on…
February 10

Adventure mode makes a welcome return after being absent in Ultra Smash. Local multiplayer has a ton of options on…
February 21

Guides Adventure mode makes a welcome return after being absent in Ultra Smash. Local multiplayer has a ton of options…
8 months ago