The Walking Dead game series has always been an apt representation of Telltale Games. The inaugural season represented the best of what the studio had to offer, while the inconsistency of later ones also demonstrated their wavering quality and ignorance towards to annoying technical shortcomings. THE WALKING DEAD: THE FINAL SEASON EPISODE 1 is the intro of their last game on this fittingly shambling engine and, thus, feels like the sendoff to a certain chapter of Telltale’s existence. Even with new technology on the horizon, the first episode of this (alleged) final season feels like a testbed for a better style of game that adds new gameplay mechanics and a more cinematic presentation while maintaining Telltale’s signature solid character work.

The Walking Dead: The Final Season Episode 1 Review: Orange You Glad Clementine is Back? 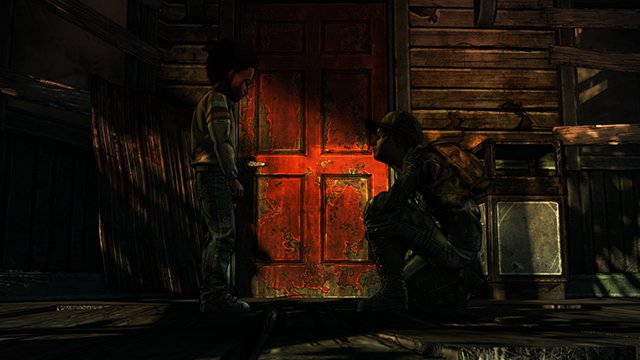 Clementine is one of the studio’s most famous original characters. She has returned to the main role in this newest season, completing her transformation from defenseless child to hardened young adult. The tables have turned, however, since now she is the guardian of a young boy, AJ, placing her in Lee’s shoes from the first game. It’s a lovely full circle, one we rarely see in video games.

Since we’ve seen Clementine grow over the course of an in-game decade, it gives us a better appreciation of her parental instincts we finally get to see in full force this season. And since AJ is around five or six years old, we get a look into how those parental instincts interact with a speaking, occasionally bratty child. It pushes her (and sometimes you) to make tough decisions and shows us how drastically her role has changed since season one. The choices may not branch as heavily or be as drastic here, but they show us a character struggling to get by yet somehow still managing to be the best surrogate mother she can be. It’s heartbreaking and heartwarming and something I want to see the rest of the episodes continue to play with.

AJ, like the younger version of Clementine, has his own charming personality and never feels like a whiny meatbag that’s only serves to be protected and hauled around. He can hold his own — sometimes a little too well — and is both an innocent tension reliever and the source of said tension. The apocalypse doesn’t stop kids from being shitty and this core friction sets in motion some of the conflicts this episode loves to slowly unfurl. His actions set up some of this episode’s drama and eventual payoffs while serving as the canary in the coal mine of the possible troubles he’ll cause down the road.

His actions can cause schisms between you and the band of people you come across in the game. Most of these folks hover around the upper echelon of Telltale’s original work as they unfold and you begin to dig deeper into them. Solid writing and performances gave these characters life and made the core crew people I wanted to know more about, which isn’t something I’ve always been able to say for every game in the series. This episode is admittedly a lot of setup for what’s coming down the line, which means it’s leaning more heavily on its characters over some complex narrative. And that’s totally OK, given the quality of those characters. 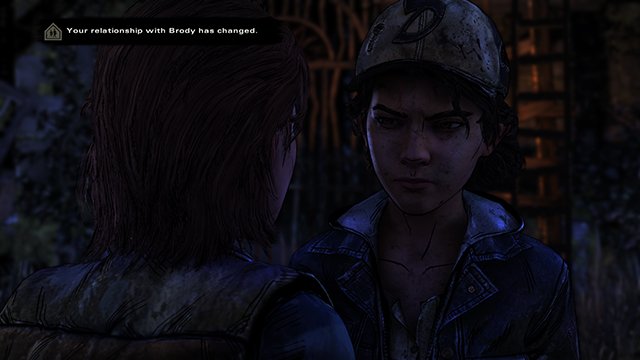 However, the game’s improved technical chops and more cinematic structure help elevate the performances to a level we’ve had to imagine for years. Telltale’s lineup has usually forced us to focus on the writing and tone to look past the stilted animations, frequent stutters, and generally subpar presentation. The Walking Dead: The Final Season Episode 1 feels like the first game to make the bold steps into modernity by attempting to look more like a regular video game over a busted (but usually engaging) point-and-click adventure.

The color palette is much brighter and more detailed and is a closer portrayal of the graphic novels that inspired it. Fluid animations shame everything that Telltale has put out and, while you won’t confuse it with God of War or Uncharted 4, make the game fit in with its contemporaries. The framerate also held up well and the few load times I had were pretty short and unobtrusive. 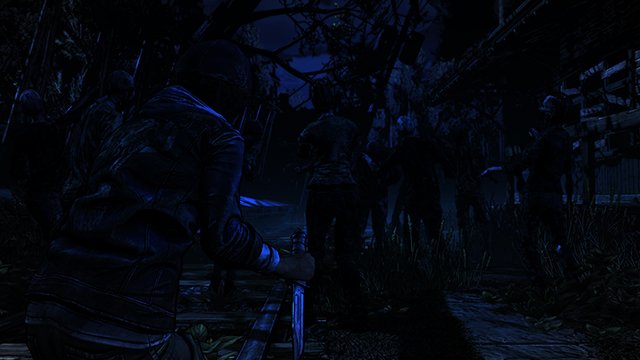 It even successfully borrows some elements from film to bolster its visual style. Depth of field is used subtly to great effect and seamless transitions from cutscenes to gameplay keep you immersed. There’s even an incredible one-shot sequence reminiscent of the best scene in Alfonso Cuarón’s masterpiece, Children of Men. All of these elements pull the game into 2018 and iron out the rigid appearance we’ve been compelled to ignore for the last five years, which has only gotten more difficult to do over time.

The game speaks a more cinematic language but also a better gaming-centric one. While there are still quick time events, it dabbles with actual game mechanics. In some scenarios, zombies can be stunned or killed at the player’s discretion, effectively giving the game real combat. Stunning slows down walkers if you’re surrounded and killing is better once you’ve separated them from the herd. The newfound behind-the-shoulder camera brings an unforeseen level of intimacy to the calmer bits but makes these action scenes better than they have any right to be, despite not always as smooth as you’d hope. It resembles more of an actual video game now and might be a decent indicator of what Telltale’s future might hold.

And that’s encouraging for the next three episodes and for Telltale as a whole. The Walking Dead: The Final Season Episode 1‘s endearing characters and lovely cliffhanger ending have me eagerly anticipating what’s coming next, like any good Telltale game of old. But its better camera, updated presentation, and deeper gameplay mechanics have me interested in whatever new things the studio is cooking up after it puts Clementine’s story to rest. Its themes and setup are obviously trying to repeat the success of the first season and, while that has yet to be seen, this episode is the good first step in making that lofty dream a reality.

The Walking Dead: The Final Season Episode 1 was reviewed on PS4 via a digital code provided by the publisher.

A new-look Leatherface is coming to Dead by Daylight

The mask-wearing killer is back.
News 1 year ago

Cut off their consoles.
News 2 years ago