There's still a lot of work to be done in Arkham City.

I realized something last night after completing Batman's latest campaign against scum and villainy. The best games are the ones that make you feel something. Limbo's quiet violence makes you feel lost, alone, and in danger. The best moments in Assassin's Creed make you feel like an assassin yourself, at once alone, deadly, and at war with ancient forces. Earlier this year, Portal 2 made me feel so much like a freaking genius that I rewarded it accordingly.

So what is it about Batman: Arkham City that makes me feel so much like Batman?

After the events on Arkham Island, former Warden Sharp has been elected Mayor and walled off a section of Gotham to contain all the inmates and super-villains you could possibly want together in one place. Naturally, the entire community of evil has descended into chaos with the likes of Joker, Two-Face, Penguin, and Mr. Freeze driving the action. Someone behind the scenes is playing puppet master, with Professor Hugo Strange given the reigns over Arkham City and its Tyger guards.

That's all I'll say. Storytelling in games is difficult enough without someone spoiling it for you. Arkham City's wealth of side missions will attempt to distract you, but breathlessly speeding your way through the campaign is more than forgivable. This is a Batman tale served more faithfully to the character and comics than any Batman movie has done. The best pieces from Nolan's latest works are present, as are the gothic themes from Burton's classic. With longtime Batman scribe Paul Dini at the helm, it's no surprise that AC is as engrossing as the masterful Batman: The Animated Series. 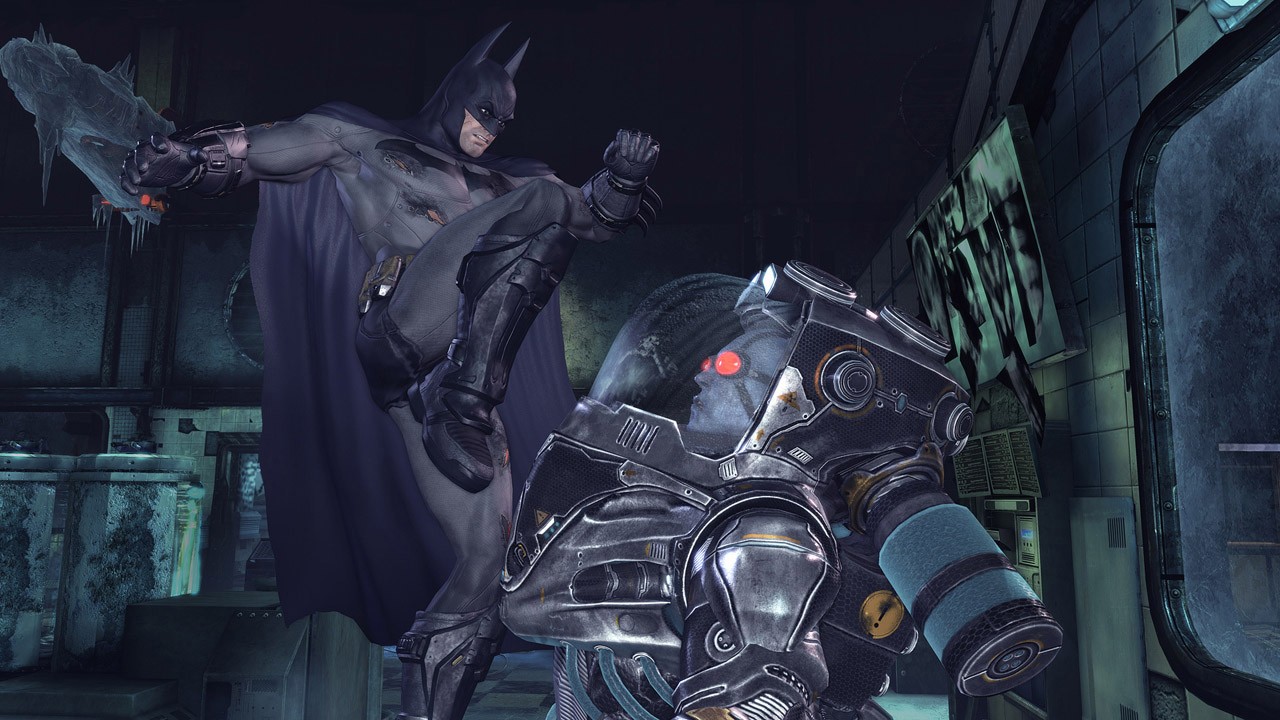 Even the game's soundtrack bears noting for its memorability, drama, and production values. Rocksteady wasn't screwing around and neither does the subject matter in the game. In fact, I'm surprised the ESRB assigned Batman's latest outing with a 'T' for Teen rating. There's more than enough violence and disturbing imagery to go around. One scene in particular left me recoiling in horror, but I'll leave the moment for you to discover on your own.

Rocksteady's heavily modified Unreal Engine is a sight to behold as well. I'd go so far as to say the developer has beaten Epic Games at its own technology with Batman: Arkham City handedly surpassing Gears of War 3's highest visual achievements. The entirety of the open world is detailed, vibrant, and packed to the gills with content. 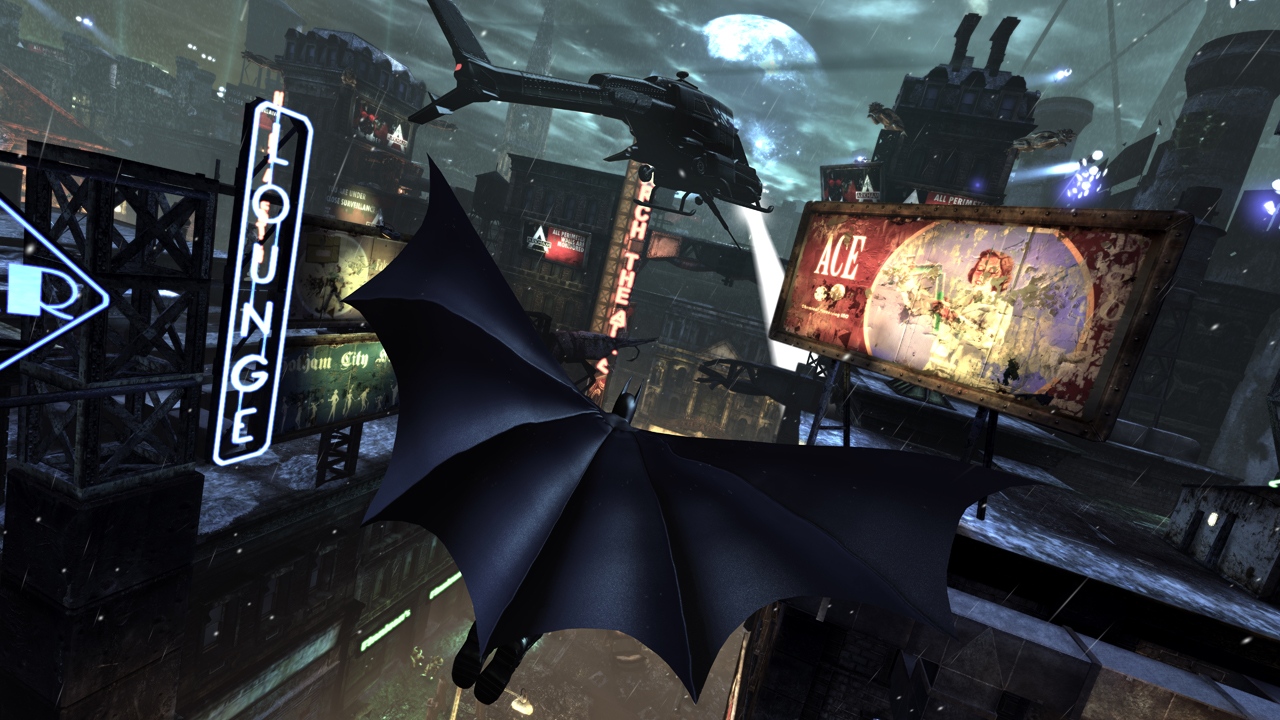 400 Riddler trophies await your discovery. Side missions litter the landscap,e and thugs hang out on rooftops and in alleyways just waiting for an ass-kicking. Major players in Arkham Asylum now fill optional, entertaining distractions while villains that missed the first Batman outing get a heaping helping of spotlight this time around.

Even the game's boss battles managed to reach highs I haven't seen in some time. At once varied and challenging (as level bosses should be), Arkham City's gallery of rogues will only serve to propel you further through the story and the world.

I'm gushing, I know. When a game gives you the ability to silently dispatch a number of firearm-wielding hoodlums, grapnel hook and glide to a completely different location, and then enter fisticuffs with a group of 20+ gangsters, you can't help but fall in love. I put the controller down and said, "I am vengeance, I am the night, I am the Batman." 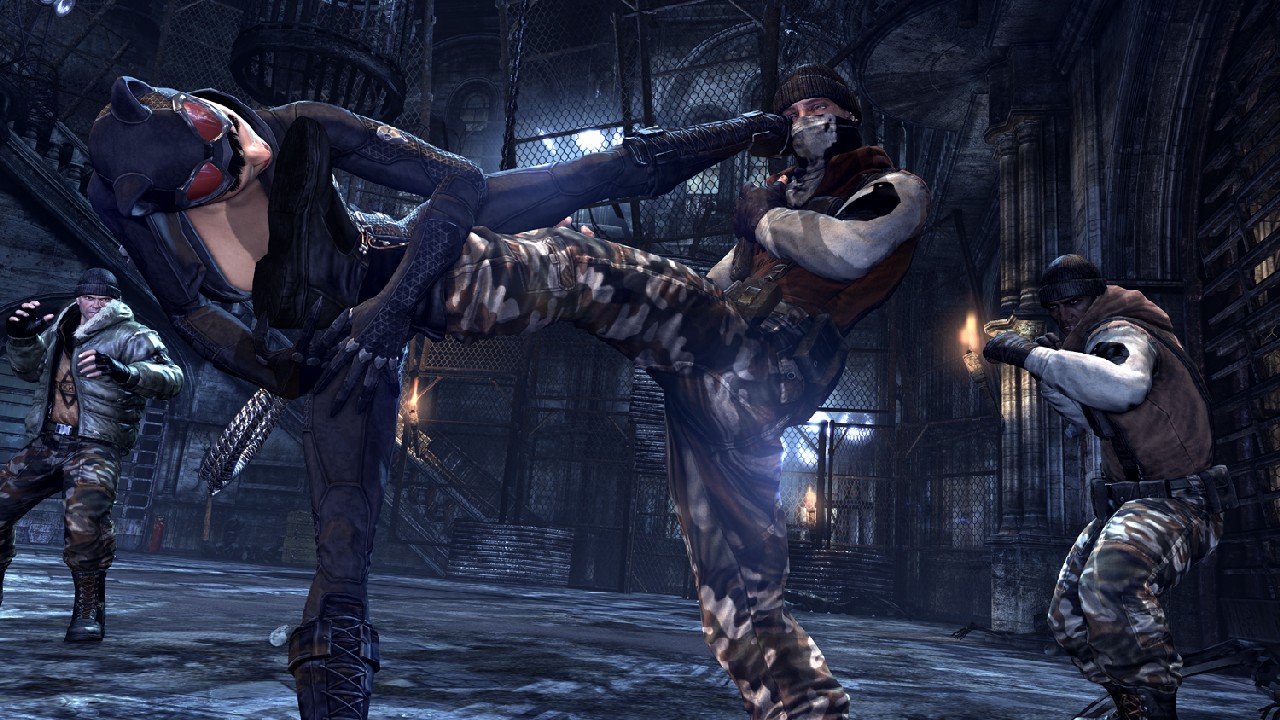 That's the true success in Arkham City. Combat is twice as fast, twice as fluid, and three times and deep as it was in Arkham Asylum. Predator rooms give you even more enemies to deal with and just as many new gadgets to put to smart use. The way you navigate Batman through the open world is so brilliantly accomplished, it has to be played to be believed.

So what's there not to like? It's difficult to say really. I'd be reaching if I harped on about any one aspect of the game. I suppose certain villains could really have used more screen time, but the main attractions get exactly as much room as they need. I would also say Arkham City could be a little bigger, but you'd be sacrificing the open world's density. Finally, there's the business behind the Catwoman DLC, but you should buy the game new to reward Rocksteady for their achievement anyway.

The long and the short of it is that you need to play this game. You've just got to play it. Even if you're not a fan of Batman, there's a lot to love in Arkham City. It's easily stolen a spot on my Game of the Year shortlist, and it will on yours too.

Now if you'll excuse me, I've got some faces to smash and some thugs to string up on gargoyles. These streets won't clean themselves, you know. *Vanishes*

Review based on PS3 version. Retail copy purchased by reviewer.

No one can hear you scream.
Games 7 hours ago
6