The War of the Worlds Review

In a world being quickly overrun by merciless martians, human-hunting tripods, and drones with incinerating weapons, chances of survival is, well… humanity is pretty much screwed. The War of the Worlds is an arcade game that follows the events from H.G. Wells’ classic novel. Although instead of relaxing and reading a book, you should expect a game which invokes plenty of frustration and rage.

Throughout this puzzle-platformer game, you often duck, roll, and evade heat-rays, red weeds (similar to land mines), and drones that act like a search helicopter, except they obliterate you with a precise laser if you’re spotted. With timing, good reflexes, and a little bit of luck, you may live to progress to another level, but not without a challenge.

Your wits will be tested, so don’t be a dud and expect an easy game. Some levels are more monotonous than others, where you jump from one collapsing building to another building that topples over without encountering any obstacles. The more challenging levels consist of jumping over fiery pits, dodging terrestrial lifeforms, and sprinting from cover to cover to avoid being fired upon by a drone.

When a game is challenging, it is rewarding once you complete it. However, the fun is taken away once it turns into a chore. In one level, I was forced to flee with others from a tripod, but we were stopped by a thick concrete wall. The narrator explains there isn’t anywhere to hide and we can only evade the enemy’s heat-rays. With this in mind, I run the other way with the crowd before the tripod gets closer. This is where I died more times than I’d like to admit.

Apparently, I was supposed to remain at the wall until the tripod came, so it can throw an object at the wall, knocking it down. I could then climb over it and seek shelter. If you’re not near the wall, though, the tripod never throws the object and the structure remains, which would leave anyone confused as they run around and try to figure out where to go next. I don’t understand why the wall isn’t knocked down regardless of where I choose to go. This is just one of several similar instances that will cause confusion throughout the game. 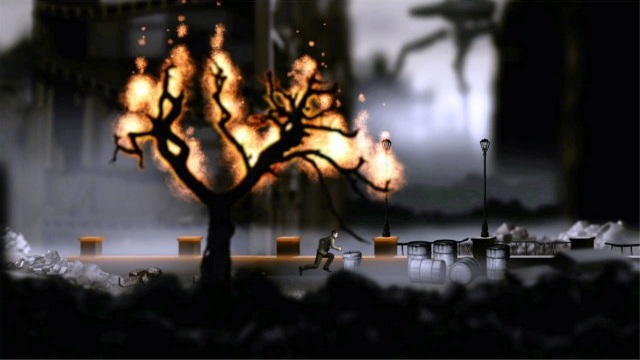 Note that there aren’t any hints to guide you along the way, either. Markers or highlighted areas wouldn’t fit the concept of the game, which is to emphasize that you’re a survivor in this apocalyptic setting, so resources are limited. A subtle hint, though, would be manageable, like the little boy in Limbo who simply looks up at a point of interest, giving the player some understanding on what to do next. I could see this or something comparable be easily implemented in The War of the Worlds, but alas, I’m left to figure out how the game wants me to play, instead of me playing it.

Frustrations aside, The War of the Worlds excels in delivering a threatening atmosphere where you’re constantly pressured by environmental hazards, obstacles and the enemy. While tripods with devastating heat-rays aren’t enough, the aliens throw in a type of poisonous gas that seeps through vents as you run through a maze of destroyed walls and floors in an abandoned apartment complex. Electrical wires hang from the ceilings and zap you if you get close. Drones climb walls and jump and attack you like a spider if you’re near. 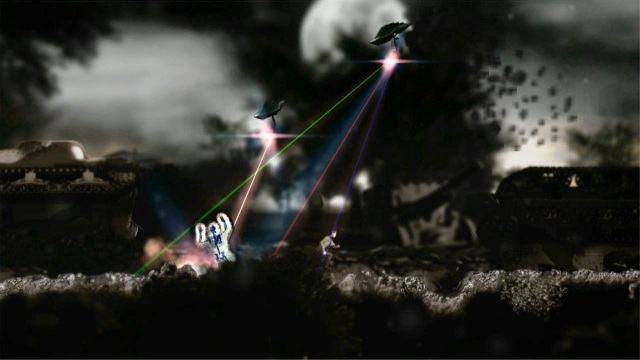 That is just one level. In the background of other levels, you see silhouettes of the tripods seeking out more survivors or their exploding heat-rays. The foreground, too, has silhouettes of people running or tanks passing by in a hurry. In turn, this slightly obscures your vision, but instead of it being an annoyance, the effect is a nice touch, emphasizing how much chaos would occur in an alien attack.

All in all, if you enjoy the puzzle adventure genre, The War of the Worlds will definitely fix your withdrawals for a challenge if you’re looking for one. On the contrary, the game does have its dull moments where you feel like you’re wasting time instead of feeling like a hero. At least, you have pretty scenery to look at. The presentation is the game’s highlight while the gameplay, unfortunately, doesn’t meet that same degree.

Review is based on Xbox 360 version. Code provided by publisher.

Challenging levels ...that will give you a headache ,,,including the dull ones Creative presentation Satisfying visuals No one likes doing…
Friday

Challenging levels ...that will give you a headache ,,,including the dull ones Creative presentation Satisfying visuals No one likes doing…
February 10

Challenging levels ...that will give you a headache ,,,including the dull ones Creative presentation Satisfying visuals No one likes doing…
February 21

Challenging levels ...that will give you a headache ,,,including the dull ones Creative presentation Satisfying visuals No one likes doing…
February 24

Guides Challenging levels ...that will give you a headache ,,,including the dull ones Creative presentation Satisfying visuals No one likes…
8 months ago