It’s fun to be excited about mobile titles again. Apple Arcade has been a rousing success in getting people stoked for phone games, and that stretches even beyond the confines of the Apple ecosystem. Despite Apple promising “exclusive” games,” that only concerns cell phone rival Google and its Android OS. This strategy leaves players of other stripes free to sample their wares on the platform of their choosing. When looking through the bountiful number of new releasing popping up over the last week, Cat Quest 2 stuck out. Not because of any overwhelming love of animals, but more because of what it promises. This is a simple adventure that anyone can enjoy, and gaming needs more of those. Do the team at The Gentlebros really hit that accessible mark or do things get a little ruff? 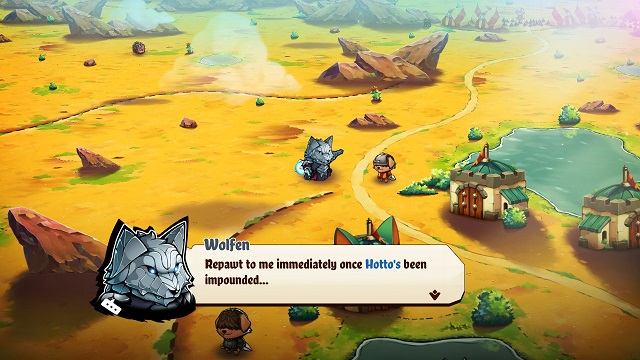 I would apologize for that dog-related pun about a game mostly about cats, but you’ll need a strong stomach for wordplay to enjoy Cat Quest 2. More so than any RPG elements or cute animals, Cat Quest 2 seems designed mainly as a pun delivery system. No matter what clever word connection you can make to the world of felines, Cat Quest 2 is one step ahead. Perhaps it’s a good sign of what the game truly wants to accomplish. While this overwhelming punnery may put off some players, it will probably delight the type of people who share cat videos in 2019; the same people who probably game incredibly infrequently. It’s a way of bringing the tropes of old school Zelda to the true masses, and in that it mostly succeeds.

Because of its intended audience, nothing in Cat Quest 2‘s story is going to surprise you. You and a potential co-op partner play as a pair of warriors, one cat and one dog. You awaken with amnesia and only a Navi-type spirit helper can set you on your quest. Turns out, you are the rulers of the cat and dog kingdoms deposed and cast out by evil tyrants. You’ll soon meet with characters from the first Cat Quest and crawl through dungeons on the way to building a legendary weapon to take back your kingdom. All this happens within the first 15 minutes or so, and the rest of the story unfolds in a similarly swift manner. 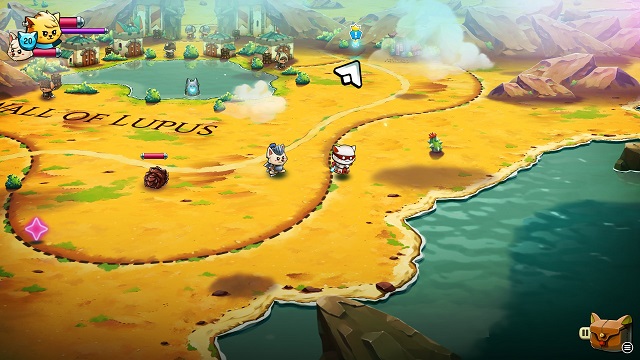 Think of it like a typical RPG set on fast forward. You get all the beats of this type of game, just none of the mucking around. You never have to grind for levels, your objectives are always straight ahead, and weapon upgrades appear on the critical path. There are side quests if you want them, but they’re even more simplistic than the main questline. Any exploration beyond that results in firm walls and occasional deadly spikes. It in understandable to want to keep players on track, but Cat Quest 2 seems incredibly against players looking around any more than absolutely necessary. The game is short either way, so it’s fine to take a look at the bonus content if you’re enjoying yourself. Just don’t expect to ever find yourself laser-focused on any of the goings-on.

Despite how that sounds, the lack of complexity is not a flaw. Playing through Cat Quest 2 feels like a reflex in my experienced hands, but it was still fun. This is a well-composed package that entertains at some point for all levels. Even the main quests don’t draw your focus too much, just giving you a brief smile. That makes it perfect for something like Apple Arcade, where you’ll be picking it up and putting it down constantly over the course of your day. By the same token, it does make Cat Quest 2 a tougher sell on platforms outside of mobile and the Switch. You just won’t want to sit down with this game for long unless you’re running sitcom reruns or a podcast in the background. 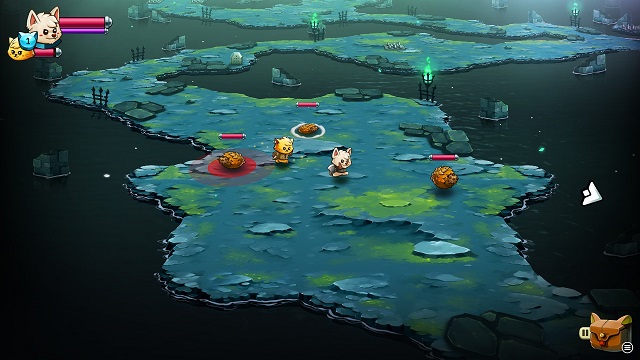 This all comes back around to the co-op, one of the big new features of Cat Quest 2. While the entire game is kid-friendly, this feature seems solely dedicated to youngsters. Whether they’re teaming up with their parents or one of their friends, they’ll probably have a good time learning the basics of the RPG genre. For anyone else, the game is so low-key that adding another player into the mix only serves to muck things up. There are better options to play with your significant other or your buddy unless either one of them is really into jokes about cats.

Whether you’re alone or with a friend, you’ll find that the combat is just complex enough to scrape by without overwhelming less experienced players. You’ve got real-time attacks and magic spells to deploy at your leisure. There is an MP meter barring your cat from spamming inexplicable flaming pentagrams, but it refills rapidly even without upgrades. By the time you get a healing spell, your duo is almost invincible on the main quest. You can seek out a challenge and push the combat system to its limits, but that seems to be against the spirit of things. Even if it’s not challenging, there are far worse casual RPGs out there. As long as you set your expectations accordingly and are into more laid back experiences, you likely won’t be disappointed. 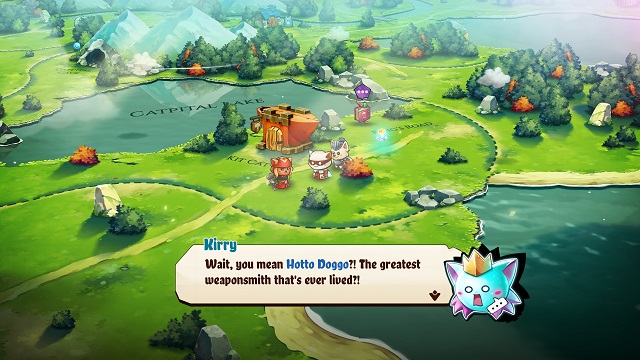 Speaking of, if you played the first Cat Quest, you probably know most of this already. Cat Quest 2 sticks incredibly close to its predecessor, almost to a fault. It helps that it retains the same sharp visual style and complex enemy “sprites,” but anyone expecting a lot of new might be let down. The map markers on the open world, most of the enemies, the spell effects, everything carries over almost untouched. Outside of that second character and equippable weapons, this might as well be an expansion pack and not the sequel its title proclaims.

Of course, the people that will play Cat Quest 2 probably won’t know what an expansion pack is. At the end of the day, Cat Quest 2 is top of the line when it comes to offering classic mechanics to those newer to gaming. You won’t be able to jump from The Witcher 3 to this and enjoy it, but it’s a great title to enjoy with a younger member of the family. The only other audience comes from those who can’t get enough of doggos and lolcats. Considering a brief search on Twitter and YouTube, that audience alone will probably be more than enough to make this game a purring success.

GameRevolution reviewed Cat Quest 2 on PC via Steam with a copy provided by the publisher.

Powered by PlayStation.
Originals 1 month ago
9