It's nice to get to see the X-Men, Fantastic Four, Spiderman, and The Avengers all in the same sandbox.

The most interesting thing about Lego Marvel Superheroes is the way it mixes the properties from the Marvel comic books with those of the movies. It's a strange collusion of Marvel's movie properties and visual styles with comics and TV animation. Both Honest Trailers and Patton Oswalt have made fair public comments about how the Avengers are Marvel's "second-tier" team if you compare them with other comic properties. This is because, in the '90s, when the comic book speculation bubble burst, Marvel sold off the rights to their biggest franchises (Spiderman, X-Men, Fantastic Four, etc.) in order to stave off bankruptcy. Since Marvel doesn't own the film rights anymore to these characters, they can't appear in Marvel's own films.

However, they can appear together on television or in games, since Marvel appears to have retained those rights. This means that in Lego Marvel Superheroes, Wolverine and Spiderman can fight alongside Thor or The Hulk. It's an interesting mix of Lego-ized film sets of the Avengers movies, with direct references to the films themselves, but comic and cartoon elements for the other franchises (Wolverine is voiced by veteran voice actor Steven Blum, who appears to be the official voice for the character now in much the same way that Kevin Conroy owns Batman). Of the film characters, only Clark Gregg (Agent Colson) makes a repeat appearance for the game, and Traveler's Tales has wisely decided to avoid sound-alikes for the Avengers characters. Softened up a bit to be E10, it's not quite as infantile as Marvel Superhero Squad, but is somewhere between that, the Wolverine and the X-Men animated series, and Marvel's more adult direct to DVD animated film releases.

It's also the best Lego game that I've played yet. Clearly, Traveler's Tales realized that they were on to something when they put out Lego City: Undercover, their Lego version of GTA. Superheroes borrows Marvel's version of New York City as a living, breathing hub you can explore and complete side missions that has a distinct GTA feel to it; except that instead of getting upset when you steal a car, the citizens gladly give it up for "superhero stuff" and will cheer for you as you pass them on the street (and really, there's nothing sillier than making Iron Man steal a city bus to drive slower than it would take him to fly from one area to another). In story missions there's a lot more integration of switching from character to character (or playing in tandem with a friend in local multiplayer) to complete puzzles by using the skills of different heroes.

Story-wise, the Avengers are still the key players, with Iron Man, Thor, Hulk, and Captain America taking center stage, and Loki sharing that stage with Doctor Doom as the prime antagonists. The plot involves the Silver Surfer crashing to Earth and his board being scattered into "cosmic bricks" that Doom becomes set on collecting for his latest scheme. The game is also the most comprehensive completionist dream I've yet seen in a Lego game, sporting over 150 unlockable Marvel heroes and villains, numerous side missions that can be completed after the main mission, and standard Free Play modes to use other characters abilities in those levels to unlock extras.

One of those unlockables is Deadpool as a player character, for whom you must collect red bricks to unlock. Additionally, side quests are narrated by Deadpool (Nolan North, reprising his role from the Deadpool game) and the story is told in comic book form, but still Lego-ized. Another fun feature is Stan Lee's cameo appearances (as a Lego mini-figure) in each level. The comic creator who's long been the face of Marvel comics is hidden in each level and can be broken free for extra gold bricks. 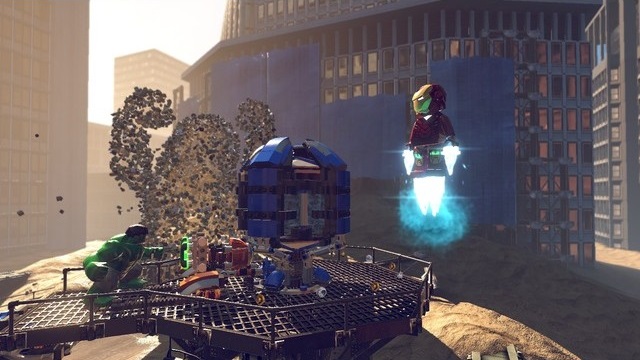 Wait, did I just write "Lego mini-figure"? Yes, I did. Lego Marvel Superheroes introduces a new Lego character type, "Big Lego" figures like The Hulk, The Thing, Abomination, Iron Man's Hulk Buster Armor, etc., who have specialized abilities and limitations. The most versatile of these is probably The Hulk who can change back into the purple clad Bruce Banner with a button press.

Lego Marvel Superheroes is also the best-looking Lego game out there. Lego particles swarm around figures like Sand Man or Magneto as a way of showing their waves of power. The environments are large, and New York itself is a fantastic, cute-little Marvel sandbox to play in. It looks particularly good on Wii U, the quality in the city sections being a little higher than what I saw when I played a bit of it on the Xbox 360. It's only use of the Wii U Gamepad is that rather than going split screen, the GamePlad player can opt to play on their screen while the second player (using a Wii-Mote and Nunchuk, or Classic Controller) plays on the television.

Still, it's not a perfect game and has a few bugs. At its worst, the game froze once and required a system restart. Most of the glitches were minor annoyances while others exacerbated design problems. One problem encountered numerous times was that side missions would take precedence away from main story missions, and navigation would immediately shift to the side mission and no longer show a path to main story mission locations. There's also a glitch where the game might continue to show directions to a quest that has already been completed. 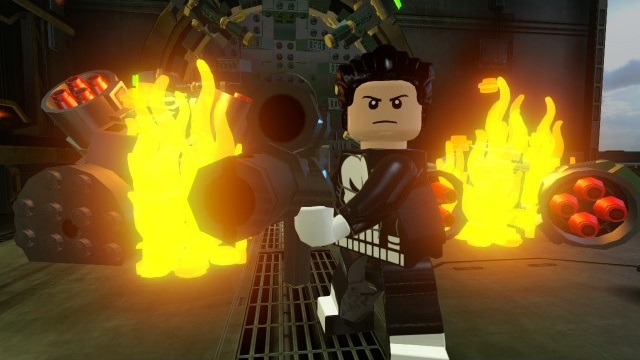 Worse than that, there didn't seem to be any mechanism for switching between story and side objectives, no sub-menu or way of selecting them in any way. Additionally, some of the puzzles could be a little obtuse, with little direction in what's supposed to be done. Often enough, I tried to jump ahead in the puzzle and was frustrated that I couldn't, say, make Mr. Fantastic float to what seemed like an available platform (which was locked up with an invisible wall) until I made The Thing tear apart a wall somewhere down below.

This obfuscation of objectives extends to a lot of basic mechanics. The game doesn't have much in the way of a tutorial, so I ran around for quite a long while before finding the S.H.I.E.L.D. terminals that would let me buy characters and vehicles I'd unlocked. Similarly, I beat my head against a wall finding the character selection screen (a really essential tool for free play sections and level replays) since the instructions were not entirely clear on how to do so. The Wii U version also came with no paper manual; the game does have a barebones manual that can be viewed from the Wii U home screen, but that's a little obtuse, since few people are likely to look for it there.

These are relatively minor annoyances for the insane amount of content Traveler's Tales has poured into Lego Marvel Superheroes. The sheer number of characters and the city itself make it an achievement, even without the strong level design and spot-on take on mixing Marvel's movie, comic, and television properties. It really is the best Lego and best Marvel game that I've played—an excellent ride.

Copy provided by publisher. Review based on Wii U version. Also available on Xbox 360 and PS3. Will be available on PC, PlayStation 4, and Xbox One.

What could have been.
News 2 months ago

Prepare to pounce.
News 3 months ago
9

It's the end of the world as we know it.
Games 3 months ago
8