A delicious tug of war.

While Cut the Rope didn’t turn into quite the colossal franchise Angry Birds did, as far as Apple’s App Store is concerned, it may be just as recognizable thanks to over 400 million downloads of the original game. After a couple successful spin-offs, a true sequel has just released. Much of it sticks to what made the original Cut the Rope so deliciously good, but relies a little more heavily on microtransactions to flesh out the experience. Is Cut the Rope 2 an experiment gone wrong, or another holiday gift?

In past games, you help Om Nom eat oh-so-tempting candy inside a box by cutting ropes for physics-based fun. You can expect much of the same here, except Om Nom leaves the box and sets out on an outdoor adventure featuring new stages and a few new creatures, The Nommies, that alter the gameplay slightly. They’re not very different from the obstacles in past games, but it’s nice to see that Om Nom isn’t the only strange creature on the block. There’s certainly a level of cuteness in their design, from their looks all the way down to the “bump” noise Blues make when you tap on them.

The Nommies are crisply animated, as are the gorgeous HD backgrounds. Clearly, there is a focus on taking advantage of the increased resolution of today’s tablet screens in Cut the Rope 2, as the visual leap is quite remarkable.

Each level taking place of the boxes of past games has a certain theme to the design, with each featuring a different Nommie inhabiting it. Roto is a little flying bugger that can grab Om Nom or the candy and carry him to other points of the Forest stage. Lick creates bridges that can drop or block the candy on its way to Om Nom’s mouth in the Sandy Dam. Toss has a spring-like head that bounces the candy around the City Park. Boo, the most creative of the bunch, scares Om Nom into the air at its very sight if spotted in The Underground. Last is the aforementioned Blue, that duplicates himself to help Om Nom get through The Scrapyard.

The gameplay, while challenging and witty, doesn't strike me as inventive as I’ve seen it in the past, even with these new obstacles The Nommies provide. It’s all still physics-based, but much of the first three stages can be completed in a minute or less with very few swipes. It’s not until the fourth and fifth levels where solutions aren’t as obvious, and might lead to some head-scratching.

If you do run into a problematic stage, you can use a solution bug that shows you each swipe step-by-step to complete the stage. It’s helpful and they give you a few to start out with for free, but as the game becomes more difficult—and although it’s still not necessary to buy them—using them gets a lot more tempting.

That’s certainly a complaint one could make, but in the same sense it’s also smart design in terms of using the gameplay to generate revenue, and it’s a merit to the gameplay itself that it’s strong enough that people don’t want to give up, even if it means using or paying for these puzzle-solvers. The problem I do have is with the addition of shamrocks, which can only be obtained by outfitting Om Nom or the candy with balloons—also a separate paid item—so that he can float to the shamrock and claim it. Shamrocks are necessary to unlock certain tucked away stages, but cannot be grabbed during normal gameplay, so it almost forces you to spend cash on these balloons. 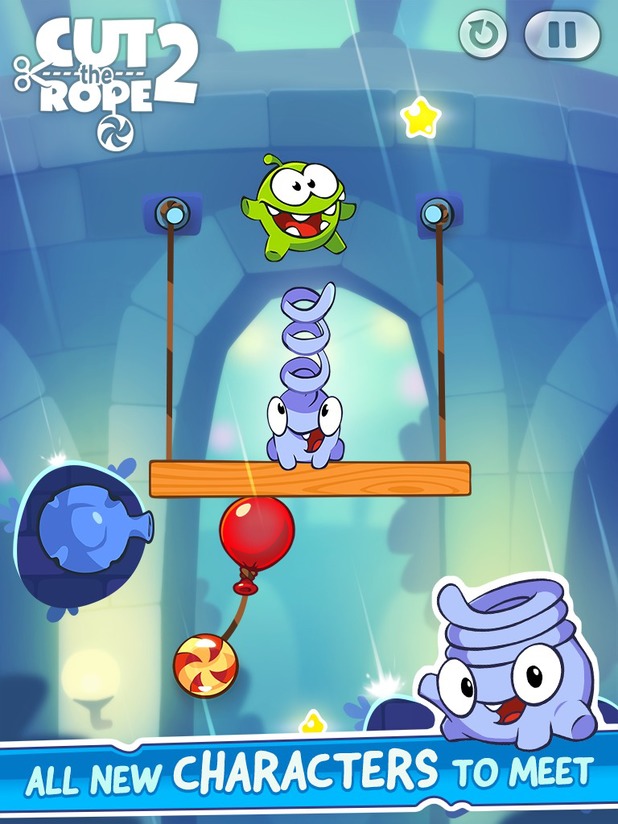 Like the puzzle-solvers, you don’t have to buy them and can even earn them as gifts, but this is where monetization ruins the fun for me. Let’s say you’re in the mood to feed Om Nom some candy, but all that’s left are these shamrocks and the stages you unlock after getting them. You see a notification that you have a free gift, which very well could be more balloons or puzzles solvers, you open the app and select a butterfly. Except when you do, it’s not balloons, so your option is to buy some (no thanks), or come back tomorrow and try again. Cut the Rope 2 is a solid game and the next entry in an adorable franchise, but it’s not going to get me to check back every day in hopes that I’ll get the gift I want. I don’t want to check back each day. I want to play the game I want to play without stopping or having to pay.

Paywalls like this are common these days, and they can be as innocent as allowing you to solve a puzzle, or as devious as forcing you to check back daily or pay if you want to get far enough in the game. Thankfully, you’re not repeatedly badgered to spend any money—that’s you and your wallet’s decision to make—but I have to knock Cut the Rope 2 for hurting the game’s accessibility with microtransactions.

It’s only a small knock, though, because Cut the Rope 2 is an extremely fun, adorable, easy to learn, yet challenging game. With over 100 stages of fun, each lasting about a minute in length, Cut the Rope 2 is both good for quick bursts of gameplay or longer bouts on the go… until it’s time to pay, then only the most invested players will check back or pay.

Code provided by publisher. Review based on iOS version. Will be available to Android at a later date.

Developer miHoYo has confirmed the special Genshin Impact 3.0 livestream date and time as August 13 at 5am PT /…
News 6 months ago

In for the long haul.
News 1 year ago