In Kingdom Come Deliverance, Mysterious Ways is a main quest that continues the story of Henry trying to track down the bandits that stole his father’s sword. Limpy Lubosh and the information he has is your target in Mysterious Ways. There’s a couple of solutions to this quest, and the decision on which one to go with is yours. One of the beauties of Kingdom Come is that you actually get a lot of choice on how you accomplish your quest objectives, so weigh both options and go with your gut.

You’ll trigger the start of mysterious ways when you reach the end of Ginger in a Pickle. Once you finally catch up to Ginger he’ll spill the beans on the bandit he recognized during the bandit attack on Neuhof. He’ll tell you about Limpy Lubosh, and you’ll get the info you need to proceed to your first destination in Mysterious Ways: Uzhitz. When you arrive at Uzhitz, you can start looking for Limpy. The first logical choice is the tavern, since Ginger mentioned meeting him there. Ask the local citizens about Limpy, and you’ll find out he wasn’t particularly well-liked. He’s a drunk and scoundrel, and if he’s not out drinking or thieving, then he’s usually laid up in his house. Keep talking to people in Uzhitz, and you’ll be pointed towards Limpy’s house.

Alternatively, you can just look for the house with the huge crowd of people. When you approach Limpy’s place, you’ll see a group of peasants in front of it gawking. Talk to the bailiff standing by the door to the house, and you’ll find out that Limpy won’t be able to answer any of your, or anyone else’s questions again. Upon entering the house, you’ll see that Limpy has been crucified, likely by one of the bandits that you’re looking for.

The bailiff won’t have much for you, but he will let you know that the village priest, Godwin, was likely one of the last to see him. Head over to the church and talk to the priest. He’ll let you know that Limpy did make a confession to him recently, but he refuses to let you know what it was. He invites you to the tavern to drink though, which might give you a chance to earn his trust.

When you meet the Godwin at the tavern, he’ll start a conversation with you. This is your chance to earn his trust. All you have to do is answer each question he asks truthfully, and when you say that it’s getting late, he’ll ask you to drink with him.

At this point, the quest can branch one of two ways. If you choose, “I’d say that’s a good plan,” you’ll stay and drink with the father, and party the night away culminating in Henry getting a little action from one of the barmaids. This path will also get you the “Sinner” trophy/achievement in Kingdom Come, and earn you the trust of the priest.

If you’d rather go an alternate route to get the info on Limpy instead of through the priest, you can choose, “I’m not in the mood for drinking.” If you want to get the Virgin trophy/achievement in Kingdom Come, you must not drink with the priest, but choosing not to will also block him as a source of information on Limpy permanently.

Kingdom Come Deliverance Mysterious Ways: What are the Correct Choices for the Sermon?

So, you chose to drink with the priest. After a long night of partying you wake up in his parsonage with a hangover. The priest is even worse for the wear, and he asks you to do his sermon, as he’s too sick. He says he will tell you everything Limpy Lubosh told him if you do a good job on the sermon.

Tell the priest you’ll do it, and follow him very closely as he’s walking to the church. For some reason, if you lag behind pretty much at all you’ll fail the quest to perform the sermon, even if it’s only a minute or so.

When you reach the church, the priest will complete the dedication, and it’ll be your time to shine. You’re giving the same Jan Hors sermon that Godwin gave you the night before in the tavern. If you can remember how it went, you can try and guess the right order yourself or just use the following choices.

You’re allowed a mistake or two in the choices here, and as long as you get the majority of them right, you should be good. Once you deliver a sermon that the parishioners like, Godwin will open up about what Limpy had to say to him during his confessional. The answer will point you to another clue and end the Mysterious Ways quest. 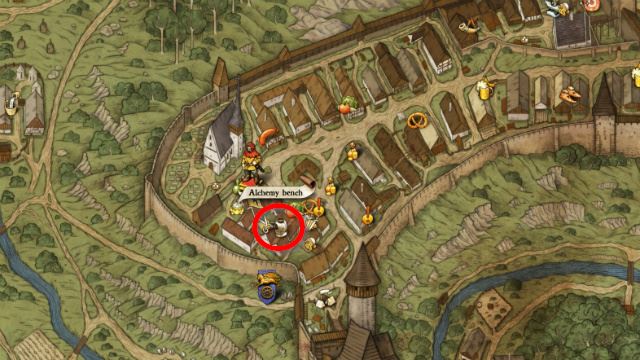 So you either messed up the sermon or chose not to drink with Godwin and you’re back to square one. Well, there’s an alternate route through this quest you can take if that happens.

Find the bailiff in Uzhitz. He can be hard to spot, but he’s usually hanging out at the scribe’s place during part of the day, and he should be the only person in town wearing a red turban-like headdress. You can also just commit a crime, and he’ll come arrest you.

Talk to him, and he’ll mention the scribe that lives in Rattay may have a way to find some information on Lubosh. Head down to Rattay and speak with the scribe in the floor above the armorsmith.

When you speak to the scribe in Rattay, he’ll mention that he needs some Embrocation for his aching joints. You can head to the local apothecary and purchase the embrocation for around 40 Groschen. You could also steal it, but you should really have 40 spare Groschen right now, and there’s no sense in making this any harder.

Once you bring the Embrocation back to the scribe, he’ll help you out. He’ll bring you to the Rattay Black Chronicle so you can check if there are any records of Limpy Lubosh in it. You can either read it yourself or if you can’t read, he’ll do it for you. Completing this step will finish out Mysterious Ways and start you on the next main quest.

For more on Kingdom Come: Deliverance check out our game hub or the guides below.

Delivering more goodies for you.
4 years ago

Kingdom Come: Deliverance Royal Edition | What all is included?

Is Kingdom Hearts 3 the last game in the series?

The missing key(blade) in the Switch library.
4 years ago