The Fortnite Update 3.2 patch notes have been deployed, allowing us to see what Epic Games has been up to behind the scenes in the hugely popular game. This time around it’s a particularly exciting update, with Fortnite Battle Royale receiving a brand new mode in the form of Teams of 20, while a swanky new Burnout skin has also been introduced. 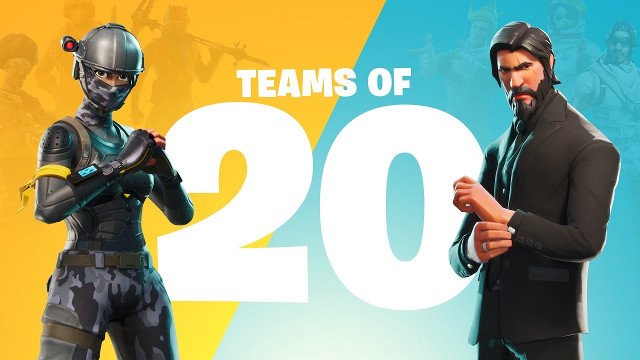 The main new addition to Fortnite is the Teams of 20 mode, which sees five teams of 20 players duking it out against one another. Each team will consist of four squads of five players, with your opponents’ number of players displayed onscreen in order to let you know who you should be gunning for.

The Teams of 20 mode will be available for a limited time only, and will bring with it significant changes including increased drop rates for treasure chests, an increased number of Supply Drops and fewer Storm Circles (six as opposed to nine.) Match length is also decreased, with Epic scaling it back from 25 minutes to 23 minutes.

Oh, and for those who like to get cocky, riding a rocket no longer cancels emotes. So feel free to dance on that thing as it hurtles towards your enemies.

You can watch the trailer for Teams of 20 right here.

A brand new Fortnite Burnout skin is also set to be introduced, with the Mad Max-esque attire being available to acquire in the game. The intimidating biker get-up will surely be a favorite among players, right next to the glorious Dark Voyager skin.

The Burnout skin will also be released alongside new Hoverboard Boost Pads for Fortnite’s Save the World mode, along with the Wukong hero, who is available to purchase in the Event store.

Take a look at the Burnout skin, Hoverboard Boost Pads, and Wukong in the gallery below:

Outside of these major additions, Epic Games has also deployed some performance and bug fixes.

Firstly, there’s been changes made to the Hunting Rifle. Now the weapon “uses perfect accuracy when aiming and not moving,” while Epic has also fixed an issue with the “accuracy reticle UI being slightly mismatched.”

Epic has also “fixed additional weapon loading issues that prevented players from being able to see or use their weapon while the world was loading,” and the developer has “fixed an issue where firing a weapon could cancel the equip animation.”

In terms of other more notable changes, Epic has fixed a bug where inventory slots would display as unusable, along with fixing a crash that would occur after players opened the settings menu. Aside from these fixes, there aren’t really any major fundamental changes apart from the new additions to the game.

You can read the full patch notes here.