Save for a few skin packs and Kombat League seasons, Mortal Kombat 11 has been sitting relatively untouched since Aftermath’s big release in May. It appears as though that’s about to change pretty soon. Not only has Ed Boon, the series’ co-creator, been teasing more MK11 content on Twitter, but a recent datamine has possibly given more light to what may be coming: a voice pack with actors from the 1995 film.

A person that goes by _ix- uploaded a video (and another a day later) of the alleged voice pack to YouTube earlier today (and was corroborated by reliable MK dataminer thethiny). It played a few intros already in the game from Raiden, Johnny Cage, and Sonya Blade from their current voice actors while then playing those same lines read by different actors. These out-of-context bits of dialogue didn’t have any credits associated with them, but they were easily comparable to the voices of Christopher Lambert, Linden Ashby, and Bridgette Wilson (who played Raiden, Johnny Cage, and Sonya, respectively). 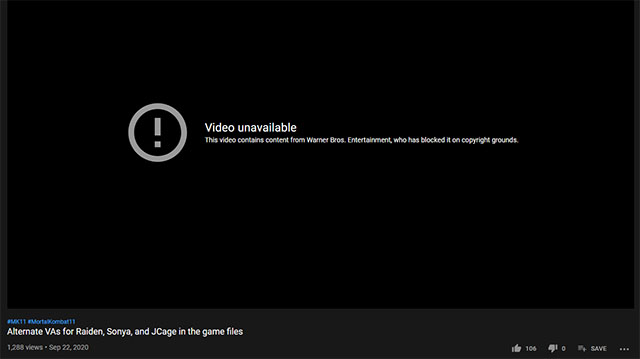 WB ended up claiming the video for copyright shortly after, making it more difficult to find and giving more credence to the video’s legitimacy. There was even an alleged leak from a few months ago (that has since been at least partially debunked) that stated that movie content would be coming to the game. And even though nothing has been confirmed, the existence of audio is quite convincing, especially since other announcer packs for the game have leaked in the past through datamining.

Other characters have also had alternate voice packs from DJ Dimitri Vegas voicing Sub-Zero to the Mr. Freeze skin for Captain Cold in Injustice 2. Cary-Hiroyuki Tagawa also reprised his role as Shang Tsung in MK11 for the first time since the films.

The speculation of the game’s next Kombat Pack has been all over the place, including guesses that it will contain DC characters like Harley Quinn and Scarecrow to classic MK fighters like Smoke. Tons of fake leaks have cycled through the game’s forums and subreddits even as Boon himself has recently been tweeting vague teasers.

He did also strongly imply that horror movie icon Michael Myers was not coming to the game, who was also in the aforementioned leak from a few months ago. This draws the rest of that leak into question, but regardless it sounds like NetherRealm is just on the brink of showing off Mortal Kombat 11‘s next phase. It just probably doesn’t concern Ash Williams, who was also heavily rumored for quite some time.

The new Mortal Kombat movie is the best MK film, but just barely

A low bar, but the new film has cleared it nonetheless.
Originals 2 years ago

How much?!
News 2 years ago

Mortal Kombat movie actors want to be put in MK11