Capcom covers a wide range of game genres. From puzzle games to fighters to adventure
games, they seem to run the gamut. Their latest action title, Gunbird 2,
is a decent throwback to the late 80’s when vertical shooters ruled the arcade
scene. It features seven characters, seven stages, and THOUSANDS of bullets along
with hours of pattern learning madness. The learning curve is so high, you may
go insane trying to find a path through a seemingly endless sea of enemy fire.
Oh well, I guess that’s just the whole point of a shooter.

GB 2 is a classic, top-down shooter that has you weaving in and out
of enemy fire like a lab rat through a maze. You also collect power-ups that’ll
give your ship more firepower than the FBI at Waco.

And firepower you shall need, since you’ll be up against tons and tons of
enemies. These guys aren’t joking around, either – there are an insane number
of ships firing all kinds of weapons at once. You’ll easily lose track of your
own ship amidst the massive amount of destruction on screen. Luckily, you have
a bomb that clears the screen of all enemy fire. The only problem is that you
get but two to start, and the bombs are about as easy to come by as an electoral
vote in Florida.

Thank god for the unlimited continues, since it’s almost impossible to clear
a stage without losing several lives. Luckily, collisions with enemy ships will
only power down your weapon, instead of destroying you completely. It’s a really
small break, though, since you still have to put up with the hail of bullets
that continuously blanket the screen. 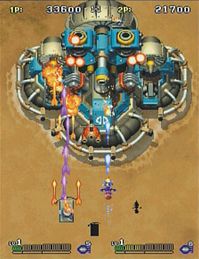 Capcom’s
mastery of 2D graphics shines. The crisp character design and sharp 2D backdrops
tie in with blazing framerates to produce a good looking game. Even at the peak
of chaos there is no visible slowdown.

The classic sound of early shooters rings strong throughout the game and explosions
just scream cheesy arcade. The music score is typical 80’s synthesizer, which
fits like a hand in glove.

Like the shooters of old, GB2 has very limited depth and there are
no extra levels or characters to unlock. All you can get is an art gallery.
This seems extremely pointless. Who gets inspired to spend hours learning the
pattern of some crazy boss fight to earn a mere picture? Give me a new ship,
a secret level…anything!

The old school feel keeps going strong in the multiplayer mode. Two players
join forces to simultaneously kick giant robo-butt by unleashing their firepower
on a single screen at the same time. There’s nothing like blowing up stuff with
a friend by your side.

Capcom characters like to moonlight and make cameo appearances. Gunbird
2 features Morrigan of Darkstalkers as a “hidden” character. Nice
idea if you’re a fan, but otherwise, it’s not a big deal.

Gunbird 2 really brings back the feel of old-school arcade shooters.
The game is really, really hard, but that’s the nature of this genre. I just
wish that there were more rewards for my efforts; it feels almost pointless
to try so hard. The graphics and sound are so arcadey that I’m still looking
for a place to insert a quarter. The old school crowd will definitely want to
check this one out, but for those not familiar with the genre, this game might
be more of a lesson in frustration than fun. 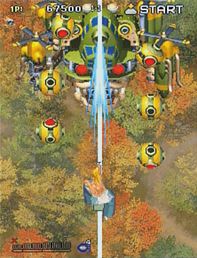 Disney Animated Movies Should Stay Away From Sci-Fi