Fox Sports Soccer ’99 offers an impressive number of gameplay options. You can organize friendly matches, league play (national or international), practice mode, and a Cup Tournament. Add to this a league
editor, network/modem multiplayer support, adjustable difficulty levels, and mid-game strategy and formation modifications. With all these features, this has the makings of an excellent game, right?

Ummm…No. Fox Sports Soccer ’99 is an unrealistic and unendorsed game, and in the end just can’t match up with the big boys.

Although the 3D stadiums and the fully rendered polygonal players look nice, it’s not nearly as impressive graphically as other PC soccer games. FS Soccer ’99 does have some good terrain and weather effects, and the TV style
replays and statistics are excellent.

Unfortunately, this game is not endorsed by FIFA, so none of the players on the 128 teams are real or recognizable. That is a HUGE disappointment. Without the endorsement alone, this game just can’t compete with the likes of FIFA ’99. Think about it. If you can’t decide between two sports games, and one has all the players on the national and league teams while the other doesn’t, which one would YOU pick? It’s that simple.

The gameplay in FS Soccer ’99 is mediocre at best. The first problem is the controls. The game’s control configuration allows only the use of four buttons, taking away the possibility of making any advanced or trick
plays. You can’t attempt lobs, shots to the top corner, or ball carrier speed bursts. On the bright side, this does make it a more simple game for the more casual gamer.

Besides the control configuration problems, simple direction movements
require ultra-quick reflexes because of the high game speed. Players move so fast, it’s actually easier to take one player and go the length of the field to score rather than passing the ball to set up someone for
a goal. Even though this makes it a fun game, it takes away from the realism and takes away from the simulation aspects. 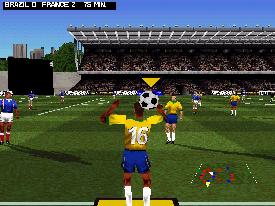 My biggest complaint with the gameplay is that the computer dictates which player you control throughout the game. On offense, this is no problem, as you control the player with the ball. On defense, however, it seems like you always control the person closest to the ball. What’s the problem? Well, the switch is often
made while you are moving a player into position to make a tackle. This results in a heap of botched plays. In addition, I played games where I shot the ball over 100 times, which is incredibly unrealistic. Where have you ever
seen a real soccer game with more than 30 shots on goal combined?

For such a simple, arcade-style game, you would expect an equally simple interface. Unfortunately, this isn’t the case. Besides the slow loading screens, there are several confusing and unlabeled icons. For example: the question mark on the main screen. A help screen perhaps? Nope. It displays the match options. Hmmm…

Besides this, half of the menus require keyboard input while the other half require the mouse. The interface is
frustrating and definitely takes away from the overall experience.

Another area Fox Sports Soccer ’99 falls short in is sound. The play-by-play announcers are repetitive and dull, and the crowd is barely noticeable. A nice feature is the option of selecting Spanish commentators, but this
doesn’t make up for the other flaws.

Perhaps the endorsement of FIFA and some more refinement could give EA Sports a worthy opponent in Fox Sports Soccer ’99. The bottom line, for those of you who live and breathe the sport of soccer (you know who
you are), is to stick with the FIFA games. But hey, if you don’t give a damn about realism and want a game that feels more like hockey than soccer, this game may be for you!