Straight to the penalty box. Review

Straight to the penalty box.

The year 2001 was supposed to give NHL fans something besides the beer man
to cheer for. With the release of the Playstation 2, visions of beautifully
rendered players hitting the ice in a fast-paced game of skill filled the imaginations
of many hockey fans. We could now look forward to better graphics, better control
and a better game with which we could beat the snot out of our loud-mouthed
buddies.

What we weren’t ready for was the same pathetic offering that had been spewed
forth all over our newly retired Playstation.

If you love hockey, you know 989’s last few NHL titles have been, uh, less
than stellar. The secret recipe for ice borne action has eluded the series and
sadly, that magic formula continues to remain in hiding. With a brand-spanking
new platform to work with, one might think that Faceoff 2001 would set
the stage for good things to come. Instead, it regurgitates the same subpar
swill that is quickly becoming the norm for 989 Sports.

Before I even started playing, I ran across a bizarre oversight that just hinted
at the disappointment to come. I was shocked, amazed and in a state of denial
all at once. Play close attention readers: You cannot select your team in Quick
Start mode. Yep, that’s right. All you can do is hit a button for the computer
to randomly choose another team. Hopefully the team you want will come up before
the next season decides to start.

More disappointment awaits you in the actual game. At first glance, it’s hard
to distinguish this game from an original Playstation title. With blocky, sharp-edged
characters, Faceoff 2001 is a far cry from the next-generation models
advertised on the back of the box. Add some herky-jerky animations and we’ve
got a very poor example of what Sony’s new wonder machine can do.

So the graphics are a let down. A brilliantly executed game can overcome a
graphical snafu any day, right? Sadly, this isn’t one of those games.

Control follows a fairly basic arcade setup with your basic shoot, pass, and
check offensive buttons. Fake shots and the icon passing ability is nice, but
they won’t really have much of an effect on your game. I just wish Mr. Deke
and Mr. Poke Check weren’t missing from the roster.

What does influence the game is the computer’s apparent lack of intelligence.
After playing just a few games, it is brutally obvious that the computer controlled
opponents can’t check to save their lives. Period. I’ve seen more hits from
Vanilla Ice.

It’s one thing when opponents let you skate past their defenses unsullied,
but when your own team lets a man through without even a second glance, things
get ugly. You’ll have to crank up the difficulty before any computer controlled
team will stand a chance against you. 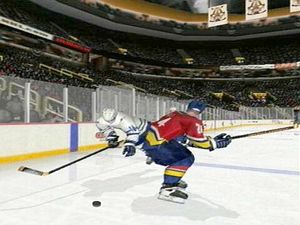 All
the modes you expect in a hockey game are here: the aforementioned Quick Start,
Exhibition, Practice, Season, Shootout, Playoffs, and Tournament. There isn’t
a franchise mode per se, but the game does allow for some trading and drafting.
What’s in a name? Overall, there’s not a whole lot new going on here.

Even though the bulk of the game is very uninspired, Faceoff 2001 includes
a few nice details. First and foremost is the smooth framerate that has no trouble
keeping up with the action. It’s always sad to see games that can’t handle themselves.
Good thing this game isn’t one of them.

Next we have one of my favorite details, which is the ability to knock the
goalie’s water bottle off of the net. I have no idea why this amuses me, but
I guess I’m trying really hard to look on the brighter side of this half-melted
arena.

Rounding out the incredibly short list of bright spots is the audio. Announcers
Mike Emrick and Darren Pang managed to keep the annoyance to a minimum. Also,
any sports game that plays “Takin’ Care of Business” deserves a cookie.

If you’re like me, there’s one last vital aspect you’re wondering about: the
fighting. In a game that’s half sport and half street brawl, the little fight
scenes are often overlooked afterthoughts. It doesn’t surprise me in the least
that video game hockey players still haven’t figured out what to do with a clenched
fist. Things ain’t any different here. Faceoff 2001‘s fights are so funny,
they look like something out of the pages of a Vince McMahon script. The punches
don’t even look like they connect!

Faceoff 2001 is quite the insult to PS2 hockey fans. It’s certainly
not as good as NHL 2001, and that wasn’t a great
game. What was barely excusable on the Playstation has no business being on
a next-generation console. Poor 989 seems to be falling even further behind
with old injuries and rusty skates. Someone definitely needs to check these
guys. 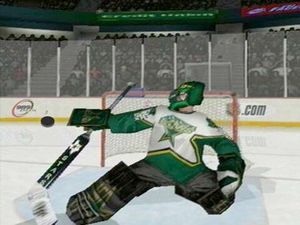 Good framerate I thought this was a PS2 game?! Real hockey players aren't this dumb Bad player animations Is this…
Friday

Good framerate I thought this was a PS2 game?! Real hockey players aren't this dumb Bad player animations Is this…
February 10

Good framerate I thought this was a PS2 game?! Real hockey players aren't this dumb Bad player animations Is this…
February 21

Good framerate I thought this was a PS2 game?! Real hockey players aren't this dumb Bad player animations Is this…
February 24